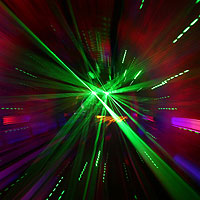 Scientists at the University of California, Berkeley, have devised a way to squeeze light into tighter spaces than ever thought possible, potentially opening doors to new technology in the fields of optical communications, miniature lasers and optical computers.

Optics researchers succeeded previously in passing light through gaps 200 nanometers wide, about 400 times smaller than the width of a human hair. A group of UC Berkeley researchers led by mechanical engineering professor Xiang Zhang devised a way to confine light in incredibly small spaces on the order of 10 nanometers, only five times the width of a single piece of DNA and more than 100 times thinner than current optical fibers.

'This technique could give us remarkable control over light,' said Rupert Oulton, research associate in Zhang's group and lead author of the study, 'and that would spell out amazing things for the future in terms of what we could do with that light.'

Just as computer engineers cram more and more transistors into computer chips in the pursuit of faster and smaller machines, researchers in the field of optics have been looking for ways to compress light into smaller wires for better optical communications, said Zhang, senior author of the study, which will be published in the August issue of Nature Photonics and is currently available online.

'There has been a lot of interest in scaling down optical devices,' Zhang said. 'It's the holy grail for the future of communications.'

Not only would compressed light make possible smaller optical fibers, but it could lead to huge advances in the field of optical computing. Many researchers want to link electronics and optics, but light and matter make strange bedfellows, Oulton said, because their characteristic sizes are on vastly different scales. However, confining light can actually alter the fundamental interaction between light and matter. Ideally, optics researchers would like to cram light down to the size of electron wavelengths to force light and matter to cooperate.

The researchers run into a brick wall, however, when it comes to compressing light farther than its wavelength. Light doesn't want to stay inside a space that small, Oulton said.

They have squished light beyond these limits using surface plasmonics, where light binds to electrons allowing it to propagate along the surface of metal. But the waves can only travel short distances along the metal before petering out.

Oulton had been working on combining plasmonics and semiconductors, where these losses are even more pronounced, when he came up with an idea to achieve simultaneously strong confinement of the light and mitigate the losses. His theoretical 'hybrid' optical fiber consists of a very thin semiconductor wire placed close to a smooth sheet of silver.

'It's really a very simple geometry, and I was surprised that no one had come up with it before,' Oulton said.

Oulton ran computer simulations to test this idea. He found that not only could the light compress into spaces only tens of nanometers wide, but it could travel distances nearly 100 times greater in the simulation than by conventional surface plasmonics alone. Instead of the light moving down the center of the thin wire, as the wire approaches the metal sheet, light waves are trapped in the gap between them, the researchers found.

The research team's technique works because the hybrid system acts like a capacitor, Oulton said, storing energy between the wire and the metal sheet. As the light travels along the gap, it stimulates the build-up of charges on both the wire and the metal, and these charges allow the energy to be sustained for longer distances. This finding flies in the face of the previous dogma that light compression comes with the drawback of short propagation distances, Zhang said.

'Previously, if you wanted to transmit light at a smaller scale, you would lose a lot of energy along the path. To retain more energy, you'd have to make the scale bigger. These two things always went against each other,' Zhang said. 'Now, this work shows there is the possibility to gain both of them.'

Even though the current study is theoretical, the construction of such a device should be straightforward, Oulton said. The problem lies in trying to directly detect the light in such a small space - no current tools are sensitive enough to see such a small point of light. But Zhang's group is looking for other ways to experimentally detect the tiny bits of light in these devices.

Oulton believes the hybrid technique of confining light could have huge ramifications. It brings light closer to the scale of electrons' wavelengths, meaning that new links between optical and electronic communications might be possible.

'We are pulling optics down to the length scales of electrons,' Oulton said. 'And that means we can potentially do some things we have never done before.'

This idea could be an important step on the road to an optical computer, a machine where all electronics are replaced with optical parts, Oulton said. The construction of a compact optical transistor is currently a major stumbling block in the progress toward fully optical computing, and this technique for compacting light and linking plasmonics with semiconductors might help clear this hurdle, the researchers said.

Other authors of the study are Volker Sorger, Dentcho Genov and David Pile, all of Zhang's research group at UC Berkeley.

The U.S. Air Force Office of Scientific Research, the National Science Foundation and the Department of Defense helped support this study.