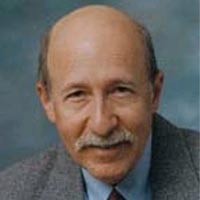 A team, including Purdue physicist Ephraim Fischbach (shown above), has answered some of the science's questions about the Casimir force's effects.

Nanotechnologists could have a firmer handle on the forces at play in their microscopic world thanks to recent physics research at Purdue University.

The latest in a series of experiments aimed at revealing fundamental knowledge of the universe has yielded precise measurement of the so-called Casimir force – a force that could make tiny machines behave erratically, causing a thorn in the side of nanotechnology manufacturers. A team, including Purdue physicist Ephraim Fischbach, has answered science's questions about the Casimir force's effects, which could help manufacturers work around the problem.

"The Casimir force is not a new discovery, but its effects on machines are essentially negligible until you start building at the nanoscale," said Fischbach, a professor in Purdue's School of Science. "Now that nanotechnology is pervading industry, it will be important for us to understand how this force can hinder – or help – in our efforts to build the world's tiniest machines."

The Casimir force has to do with the minute pressure that real and virtual photons of light exert when they bump against an object. High quantities of photons are constantly striking you from all directions, emitted by everything from your stovetop to distant stars.

"If an object creates heat or light, it shines with photons – even your own body," Fischbach said. "Usually when a piece of metal is struck with a photon from one direction, another is hitting it on its opposite side, and the effects cancel out, and it doesn't move."

But when two very small objects are extremely close together, the "photonic pressure" on the outside of each object is stronger than on the inside, which tends to drive the two toward each other.

"This effect is comparatively weak on large objects, but at the nanoscale it can really push things around," Fischbach said. "When the teeth of two tiny gears come together, for example, the Casimir force could push them together so strongly that they would stick and freeze up the nanomachinery. We needed to measure the force's effects accurately so we could factor it into future investigations."

Fischbach has spent much of his career pursuing some of modern physics' most vexing mysteries – whether the universe possesses extra dimensions, for example, or whether matter is ultimately composed of vanishingly small objects called superstrings. Answers to such questions often require a series of complex experiments even to approach them. His research into the Casimir force has proven a particularly successful step along that way, thanks to the contribution of his colleagues.

"Decca and Lopez designed a particularly good experiment," Fischbach said. "They enabled us to measure the effects of the Casimir force at the 200-nanometer scale with unprecedented accuracy."

With the assistance of Klimchitskaya and Mostepanenko, considered leading experts in analyzing Casimir force experiments, the group managed to match theory about the Casimir force with hard measurements of its effects on the nanoscale with less than a 1 percent margin of error.

"There had been at least three different theories trying to explain the workings of the Casimir force being debated in physics journals," Krause said. "This work should lay the debate to rest once and for all and allow us to get on with honing our knowledge of the force's effects."

Fischbach said further research is still needed to change the force from a hurdle into a workhorse for those working at the nanoscale.

"Some computer industry experts think that future generations of computers will use light, rather than electricity, to carry data," he said. "To manipulate light beams at that scale, we will likely need tiny mirrors that can pivot to reflect photons down different channels. Knowledge of the Casimir force – which essentially deals with photons' ability to move small objects – could help us make those mirrors move with precision."

Another, more contemporary, application could be the fiber-optic industry, which also moves information-carrying photons around.

"Fiber-optic cables carry thousands of data streams, each of which is like a train moving down a track," Krause said. "Eventually, each train has to be routed at a switching station. The Casimir force could help us to construct switches that don't heat up like conventional electronics do, meaning we'll have fewer opportunities for errors in the switch house."

Fischbach said he was particularly excited about the results because the experiment could lead to evidence for new dimensions in the universe – the ultimate goal of his investigations. But for now, he said, the team is pleased to have made a contribution to science that will impact both fundamental and applied physics.

"It's not often that you get to unify theory and practice this closely," Fischbach said. "For the nanotechnologists, this discovery means a new tool in their belt. But for a theorist like me, it's also exciting because it could help me with my next experiment, which aims to find out whether the universe has more dimensions than we think. So this is just the prelude – stay tuned."

This work was funded in part by the U.S. Department of Energy.