A New Twist to Dating an Asteroid 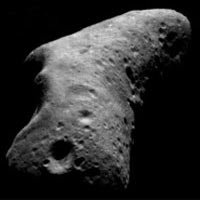 It turns out you can’t judge an asteroid by its cover, according to a recent study in the journal Nature. Or at least you can’t accurately date a certain asteroid called 433 Eros by counting the impact craters on its surface -- the traditional method for determining an asteroid’s age.

Peter Thomas, a senior research associate in astronomy at Cornell University and lead author on the paper, and Mark Robinson, research associate professor of geological sciences at Northwestern University, analyzed images of Eros gathered four years ago by the Near Earth Asteroid Rendezvous mission. The mission mapped the 20-mile-long, potato-shaped asteroid and its thousands of craters in detail. The two researchers focused on a large impact crater, known as the Shoemaker crater, and a few unusual crater-free areas.

In the Nature article, Thomas and Robinson show that the asteroid’s smooth patches can be explained by a seismic disturbance that occurred when a meteoroid crashed into Eros, shaking the asteroid and creating Shoemaker crater. The shaking caused loose surface material to fill some small craters, essentially erasing craters from approximately 40 percent of Eros’ surface and making the asteroid appear younger than its actual age.

The fact that seismic waves were carried through the center of the asteroid after the impact shows that the asteroid’s interior is cohesive enough to transmit such waves, say the authors. And the smoothing-out effect within a radius of up to 5.6 miles from the 4.7-mile Shoemaker crater -- even on the opposite side of the asteroid -- indicates that Eros’ surface is loose enough to get shaken down by the impact.

Asteroids are small, planet-like bodies that date back to the beginning of the solar system, so studying them can give astronomers insight into the solar system’s formation. And while no asteroids currently threaten Earth, knowing more about their composition could help prepare for a possible future encounter. Eros is the most carefully studied asteroid, in part because its orbit brings it close to earth.

Thomas and Robinson considered various theories for the regions of smoothness, including the idea that ejecta from another impact had blanketed the areas. But they rejected the ejecta hypothesis when calculations showed an impact Shoemaker’s size wouldn’t create enough material to cover the surface indicated. And even if it did, they add, the asteroid’s irregular shape and motion would cause the ejecta to be distributed differently. In contrast, the shaking-down hypothesis fits the evidence neatly.