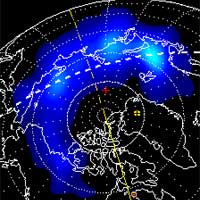 Years ago when astronomers were first planning NASA's Chandra X-ray Observatory, they didn't have planets in mind. Planets were too peaceful for x-ray astronomy. Chandra was going to reveal colliding galaxies, sizzling-hot whirlpools around black holes, exploding stars--in other words, violent sources of high-energy x-rays. Not planets.

"But planets have turned out to be pretty interesting x-ray sources," says astronomer Ron Elsner of the Marshall Space Flight Center. Jupiter, for instance, has a pulsating hot spot near its north pole. Mars and Venus sparkle like disco balls. Even the moon emits x-rays.

And Earth? Although a few x-ray satellites have looked at Earth before, the world we live on remains mostly terra incognita--a mystery. Soon this will change. "Later this year we're going to point Chandra at Earth," says Elsner. It will be the first time astronomers have carefully studied our own planet using the powerful x-ray telescope.

Elsner isn't sure what Chandra will see. "Earth might look like Mars or Venus," he says. Those planets slowly sparkle because they are bathed in x-rays from the sun. When an x-ray photon hits the atmosphere of Mars or Venus, it is absorbed by an atom--then re-emitted. Every few seconds there's a tiny flash of x-radiation caused by this process, called "fluorescence." The moon sparkles, too, although it has no atmosphere. There the fluorescence takes place on the ground.

On the other hand, Earth might look like Jupiter. "Jupiter sparkles in the same way that Venus and Mars do," notes Elsner, "but Jupiter has something extra: an auroral x-ray hot spot."

Jupiter's hot spot is caused by heavy ions such as O6+ crashing down onto the polar atmosphere. O6+ is an oxygen atom missing 6 of its 8 electrons, and it wants them back. When these strongly charged ions enter Jupiter's atmosphere they steal electrons from nearby molecules. Chemists call this a "charge exchange reaction." It's done with so much energy near Jupiter's north pole that the reaction emits x-rays.

Where do these ions come from? And why does the hot spot sometimes pulse--on and off every 45 minutes? "These are mysteries," says Randy Gladstone of the Southwest Research Institute, who works with Elsner observing planetary x-rays.

"One possibility is that the oxygen ions might come from the solar wind," he speculates. It's not easy to strip 6 electrons from oxygen, but it happens all the time in the million-degree solar corona. The solar wind, which starts in the corona, blows such ions throughout the solar system.

Like Jupiter, Earth has a strong magnetic field that can funnel solar wind ions to the poles. Perhaps, like Jupiter, our planet has a flashing hot spot. The possibility is what prompted Gladstone in 2001 to propose the upcoming Chandra observations.

"This is a technically challenging observation," says Gladstone. Chandra is a space telescope traveling around Earth in an elliptical orbit. It comes as close to Earth as 10,000 km and ranges as far away as 140,000 km--a third of the distance to the moon. Because of this elongated orbit, "Earth is not a stationary target."

It's moving and big. The planet completely fills Chandra's field of view. "When Chandra is pointing at Earth, it can't see anything else--including the stars we normally use for guidance," notes Elsner. "We have to guide the telescope using nothing but gyros."

"We had to find out," says Elsner. So he and colleagues tried pointing Chandra at Earth earlier this year. It was just a glimpse, but enough to prove "that we could successfully track Earth and gather data."

All that remains is the real thing: a long look at our planet. "We've been granted 12,000 seconds (3.3 hours) of observing time," says Elsner. But they won't use it all at once. What if Earth's appearance changes from day to day, or week to week? A single snapshot could be misleading. "We plan to divide our time into ten 1,200-second pieces and observe Earth on ten separate days."

Chandra can't see the whole Earth at once. "Our field of view is limited to an area 1100 km wide," says Gladstone. For comparison, the radius of Earth is 6378 km. "We've decided to examine the polar regions first. If Earth has a Jupiter-like beacon, that's where it will be."

A detector called PIXIE onboard NASA's Polar satellite has already shown that Earth's polar auroras have a faint x-ray glow. PIXIE data reveal no polar beacons, but that's to be expected, says Gladstone. "PIXIE operates at a range of energies (2 keV to 60 keV) where Jupiter's hot spot is invisible. Chandra can detect softer x-rays (0.2 keV to 1 keV) where the hot spot is bright."