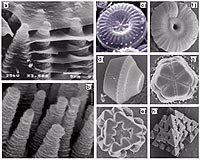 Complex nanostructed crystals have been prepared showing striking similarities with those observed in biominerals. (a) is nacre in red-abalone. (b) is synthetic ZnO crystals. (c) is a diatom. (d) to (h) are different types of synthetic silica crystals. The morphology depends on the growth conditions and can be controlled.

Click here for a high-res version of this image.

Sandia researchers are developing complex nanomaterials that look strikingly similar to the microstructures of diatoms and seashells. The materials may have potential for a wide range of applications.

Jun Liu, manager for the Department of Chemical Synthesis and Nanomaterials at Sandia, said the goal is to develop general science and technology for reliable and scalable production of nanoscale materials based on environmentally benign chemical processes.

Liu said the biochemical processes involved in biomaterials are too complicated for synthetic materials. The team is learning from the physical and chemical principles behind the formation of natural materials, and is developing synthetic routes to achieve similar structural control for the production of nanomaterials.

It is believed that such extended and oriented nanostructures will find applications in microelectronic devices, chemical and biological sensing and diagnosis, catalysis, and energy conversion and storage including photovoltaic cells, batteries, capacitors, and hydrogen storage devices. These structures could also have potential for light-emitting display, drug delivery, and optical storage.

The team has demonstrated complete control of where and how crystals are formed by selectively activating the specific surface they desire to grow and spontaneously producing complicated three-dimensional structures that cannot be formed by other means.

"We are not interested in duplicating the mechanisms in natural materials," Liu said. "Nor are we interested in reproducing biominerals."

However, Liu added, an understanding of nature’s strategy is necessary to comprehend how to create similar structures.

The strategies nature uses to produce biomaterials are drastically different from synthetic approaches. Natural materials are produced at low temperature — mostly room temperature — and do not produce significant waste. Seashells and diatoms extract calcium and silicate ions from ocean water to form hard tissues to protect the living organisms.

Natural systems use sophisticated protein molecules to precisely control the orientations and morphologies of the biominerals in order to optimize the material’s properties such as the mechanical strength. As a result, very complex architectures are formed, such as in diatoms from very simple chemicals such as silicate. Silicate, Liu says, is a very common ceramic material that is frequently experimented on in laboratories.

In general, Liu said, the proteins play two important tricks. First, the proteins control where the mineral is deposited. Second, they control how the minerals are formed. In red abalone, a marine snail, water-soluble proteins control mineralization of calcium carbonate. Some of these proteins are responsible for the formation of column-like calcite (a natural form of calcium carbonate), while others are for the formation of plate-like aragonite (an unusual form of calcium carbonate). The cooperative action of these proteins produces a highly ordered nanocomposite formed of oriented calcite columns and close-packed aragonite nanoplatelets. This combination gives the best mechanical properties to the hard tissue.

The first step of the process is to understand and control the solution chemistry. Instead of using high temperatures, high concentrations of chemicals, and organic solvents, as widely investigated, the team studies low-temperature — well below the boiling temperature of water — and low-chemical-concentration experimental conditions in aqueous environments. Under these conditions the team has better control on how fast the materials grow from the solution and avoid precipitations commonly encountered.

The minerals are controlled where they are formed through chemical and physical means. Modifying the surface chemistry is often used to stimulate the formation of the minerals on specific locations. At other times nanoparticles are used as the nucleation seeds from which the new minerals will be formed. Using this approach, the team can control exactly how the minerals are formed, and potentially align and pattern the minerals for microdevices. The orientation, microstructure, and morphology of the crystals are controlled. Since the roles of mineral-directing proteins are not yet completely understood, and since they cannot be directly applied to synthetic materials, simple organic molecules are used to control crystal growth. Computer modeling is also used to help understand how the organic molecules bind to the crystals.

"Making these kinds of complex nanostructures is a very significant challenge," Liu said. "This is a very important new research area. Not a lot has been understood."

However, Liu said, manufacturing of nanoscale materials in general remains a significant scientific and technological challenge. Most of the approaches currently investigated involve high-temperature processes and complex toxic chemistry.

One challenge now is to fundamentally understand how organic molecules affect crystal growth. Liu said this is not only a challenge for synthetic materials, but also a problem for biomineralization that needs the attention of physicists, chemists, biologists, and material scientists. Another challenge is developing general rules that will guide the production of a wide range of nanomaterials.

Liu said the team is also in the process of developing tools to control the delivery, diffusion, and transport of the chemical species in the reaction chambers.

"We will use Sandia’s state-of-the-art microfluidic platforms to provide precise control of the experimental parameters," Liu said. "The microfluidic studies may also lead to methods for continuous manufacturing of tailored nanoscale materials, including nanoparticles, nanowires, and complex nanostructured films."