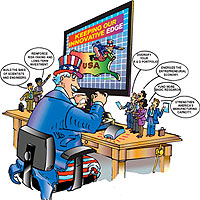 When it comes to innovation in science and technology, the United States has been the recognized global leader since the end of World War II. But today that No. 1 position is in jeopardy as many foreign governments strengthen their educational and research programs.

* From 1989 to 2001, U.S. patent applications from researchers in China, India, Singapore, South Korea and Taiwan increased 759 percent, while patent activity for homegrown technology grew at a slower pace of 116 percent.
* Sweden, Finland, Israel, Japan and South Korea each spend more on research and development (R&D) as a share of their gross domestic product (GDP) than the United States.
* Only 5.7 percent of undergraduate degrees in the United States are in natural sciences and engineering compared to 8 percent in Japan and 11 percent in Taiwan and South Korea.

Although these benchmarks are relative – indicating percentage growth rather than absolute numbers – they reflect a disturbing trend.

'The United States continues to have an innovative edge, but at the same time, our advantage is shrinking,' says G. Wayne Clough, president of the Georgia Institute of Technology and co-chairman of the National Innovation Initiative (NII), sponsored by the Council on Competitiveness (COC). A task force of business and academic leaders, NII released a report, 'Innovate America,' in December 2004 that recommends specific tactics for honing America’s innovation capabilities.

Sustaining the United States’ leadership position is a serious issue – with far more at stake than national pride. Because it leads to new industries and higher-paying jobs, innovation is directly linked with economic prosperity.

Not the Usual Suspects

This isn’t the first time America’s competitive advantage has been threatened, but today the challenge is more complex.

'In the 1980s, the United States was inventing things, but not manufacturing them as well, particularly at the small and medium-sized establishment level,' says Jan Youtie, a senior research associate at Georgia Tech’s Office of Economic Development and Technology Ventures. 'That led to government programs like MEP (Manufacturing Extension Partnership) to enhance our competitiveness. Now the real concern is whether we can maintain our pace of innovation.'

Another twist is a new cast of players. In the 1980s, competition came from high-skilled, high-wage countries like Japan and Germany. Today, emerging Asian countries are displaying surprising clout in technology. For example, India is winning recognition in software development, and South Korea is showing strength in electronics and computer storage and display technologies.

Yet China is sparking some of the greatest concern as it evolves from being merely a low-cost competitor to one with growing technology capabilities. From 1989 to 2001, China’s high-tech industry output – which includes aerospace, computers, communications equipment, pharmaceuticals and medical instruments – jumped eightfold from $30 billion to $257 billion. In comparison, the United States’ output slightly more than doubled from $423 billion to $940 billion.

'This year China is expected to produce nearly 100 million mobile phones and three million laptops, more than Korea and India combined,' observes Philip Shapira, a professor in Georgia Tech’s School of Public Policy. In addition to manufacturing, China has dramatically increased its R&D spending and is becoming a high-volume producer of research, he says. In fact, China recently edged Japan out of second place in the number of published papers on nanotechnology and is now right behind the United States.

In the last three decades, the United States has fallen from No. 3 to No. 17 in global rankings of countries with college students earning science and engineering degrees. And the future doesn’t look any better: Only 5.5 percent of high-school students taking the ACT college entrance exam in 2002 planned to major in engineering, down from 8.6 percent in 1992.

Compensation is one deterrent, experts say. Pursuing a business degree is viewed as an easier – and faster – payoff.

'This nation asks a lot of its people to become Ph.D.s,' says Diana Hicks, chair of Georgia Tech’s School of Public Policy. 'Students spend a great deal of time and money to obtain doctoral degrees when they could have been out in the market earning salaries and building pensions. In a knowledge economy, smart people have a lot of opportunities. Being a scientist isn’t the only interesting career.'

Society is another influence, others say. 'Society rewards people in its public culture and the images portrayed in the media. Yet American culture often values sports and movie stars over being a scientist,' notes John McIntyre, director of Georgia Tech’s Center for International Business Education and Research.

'The thoughtful people in our society don’t get media play,' says Kathleen Kingscott, IBM Corp’s director of innovation policy and an NII participant. Kingscott sees the effect with her two children, who aren’t interested in science, even though they are good students. In fact, Kingscott recalls encouraging her 11-year-old daughter to attend a science program for young girls sponsored by the National Aeronautics and Space Administration (NASA).

'It was the last thing in the world she wanted to do. She didn’t want to be perceived as a geek,' says Kingscott. 'We need to make it cool to be smart.'

At the same time American students are abandoning science and engineering, fewer foreign students are coming to the United States.

That’s a problem because foreign students have helped make up for the dearth of U.S. students enrolled in science and engineering. After graduating, foreign students often remain in the United States for research jobs, contributing to our nation’s knowledge base.

Some of the decline stems from 9/11, with new immigration policies making it more difficult for foreign students to secure visas. Another reason, as other countries have bolstered educational centers, their young people no longer are dependent on the United Sates for advanced training.

And if foreigners do choose to study in the United States, they have more reasons for returning home. In many countries with reformed economies, salaries for professors and researchers have escalated significantly.

When Xiao-Yin Jin was working at the Shanghai Industry Foundation in 1990, his annual salary was less than $1,200 in U.S. dollars. 'And I held a full professor position at the time,' says Jin, a visiting scholar at Georgia Tech’s Technology Policy and Assessment Center. Today, Chinese professors in key universities earn more than $12,000 per year, he says.

Chinese professors can further increase their income by doing government or industry-funded research, where a portion of grant money (about 10 to 15 percent) is available as salary or bonuses. Another incentive, government policies encourage scientists to become entrepreneurs, Jin adds. If a researcher’s innovation can be used to start a business, the organization is tax-free for three to five years.

As the entrepreneurial climate heats up in other countries, there’s a sort of 'Wild West' allure, observes Chad Evans, vice president of the Council on Competitiveness’ NII. 'There’s a sense that students could change the world if they go back to their own countries … that they might become the next Bill Gates,' he explains.

Trends in federal funding are also undermining America’s knowledge base.

From the end of World War II to 1980, Uncle Sam provided the bulk of the nation’s research and development (R&D) dollars. Yet the private sector now foots the lion’s share (68 percent), and nearly three-fourths of that money is earmarked for development, not basic research. Sometimes referred to as 'discovery research,' basic research seeks to expand knowledge of a subject without specific applications in mind.

'Basic research is important because it sets up the country for the next generation of technology so we don’t run out of innovations,' Hicks says.

Yet the portion of the federal government’s R&D portfolio that goes toward basic research has been stagnant or declining for most non-biomedical disciplines during the past 15 years, says Kei Koizumi, R&D budget and policy director at the American Association for the Advancement of Science (AAAS). Looking at 2006 and beyond, cuts for basic research look worse, he adds.

President George W. Bush’s 2006 proposed budget devotes $132.3 billion to R&D spending, up a mere 0.1 percent from 2005. NASA stands to benefit the most, with increases for space exploration resulting in fallout for other agencies.

At the Department of Defense (DOD), the biggest supporter of engineering research, there would be a slight budget increase. Yet within DOD’s accounts devoted to science and technology, basic research dollars would drop 12.9 percent with a 14.7 percent decrease for applied research, according to Koizumi.

The National Science Foundation (NSF) and National Institutes of Health (NIH), two large supporters of basic research, will see slight budget increases – 2.8 and 0.5 percent respectively. But once adjusted for inflation, there is actually less discretionary money for research: The size of NSF grants and the number of NIH research projects will shrink.

'Already at NSF, less than one out of five applicants receive funding, which compares to a 25 to 35 percent rate of funding in the past,' Koizumi says. 'Of course we want competition, but we also stand to lose a lot of good ideas.'

Investing in the Future

Basic research may seem expendable to politicians because it’s not about instant gratification.

Indeed, basic research has the ability to create entirely new areas of commercial activity. For example, basic research funded by the government has led to the Internet, bar coding, robotics and gene mapping.

Many of the products Americans enjoy today stemmed from federally funded research initiated more than 20 years ago, says Evans of the Council on Competitiveness. 'If we aren’t making that investment today, the chances of there being innovations for us to enjoy in the future are slim,' he adds.

Federal funding for basic research also has a profound effect on the talent pool. 'Universities need stable funding not only for research to come to fruition but also to train graduate students,' Rankin says. 'When students see the funding spigot turned on and off, it affects morale. They think, ‘Why put up with this?’ These are bright people who have other opportunities.'

In addition to increased funding, experts call for a diversified R&D portfolio for basic research. 'We can’t just put all our eggs in one basket,' Evans explains. 'Health sciences may be poised for great breakthroughs, but you still need the talented mathematicians for computer modeling. It’s the interface of disciplines that will lead to new fields of discovery.'

Increased funding is just one aspect of sustaining the United States’ knowledge base; innovation depends on a complex ecosystem.

Underscoring that fact, NII’s Innovate America report recommends 32 strategies across three categories: talent, infrastructure and funding. Implementing the plan calls for a unified effort, Clough stresses: 'It can’t be done solely from the government side. It requires the cooperation of industry and universities as well.'

And though the United States is still at the front of the innovation race, that’s no excuse to delay action, experts agree.

'This isn’t a problem with a short-term fix,' says Alan Porter, co-director of Georgia Tech’s Technology Policy and Assessment Center. 'Beyond our knowledge base, we have nothing else – no natural resources – that gives us a competitive edge in the global economy. We’re fine right now, but in 15 years, this could really bite us.'