Planetary tilt not a spoiler for habitation 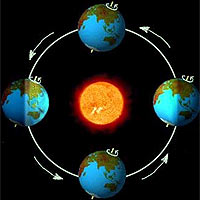 Planetary tilt through the four seasons.

In B science fiction movies, a terrible force often pushes the Earth off its axis and spells disaster for all life on Earth. In reality, life would still be possible on Earth and any Earth-like planets if the axis tilt were greater than it is now, according to Penn State researchers.

"We do not currently have observations of extrasolar planets, but I imagine that in the near future, we will uncover some of these small planets," says Darren M. Williams, assistant professor of physics and astronomy, Penn State Erie, the Behrend College. "The issue before us is what will they be like? Will they have moons? What will their climates be like? Will they be teaming with life or will life be rare?

"I suspect, based on simulations and our own solar system, that many Earth-like planets will have spin axes that are tipped more severely than Earth’s axis."

Williams, working with David Pollard, research associate in geoscience at Penn State, used general circulation climate models to simulate a variety of tilts, carbon dioxide levels and planets. They reported on their findings in the International Journal of Astrobiology.

The researchers first looked at present-day Earth with tilts of 23, 54, 70 and 85 degrees. Earth’s tilt today is about 23 degrees. The simulation that mimicked today’s Earth and tilt closely matched today’s climate, including regional precipitation patterns, snow and ice cover and drought.

The Penn State scientist explains that this decrease occurs because more land exists north of the equator in present-day Earth. Annual-mean temperatures, however, are not the best way to determine if a planet might be habitable, as seasonal temperature variations could be extreme.

"During the Sturtian, land masses were mainly equatorial and clumped mostly within 30 degrees of the equator," says the Penn State Erie researcher. "In the Varanger model, everything is close to the south pole."

"The highest temperatures and seasonal variations happen with the largest land areas at the mid to high latitudes," says Williams.

The researchers also ran some of the model Earths with zero tilt.

"Present Earth is one of the most uninhabitable planets that we have simulated," says Williams. "Approximately 8.7 percent of the Earth’s surface is colder than 14 degrees Fahrenheit on average, and this percentage peaks at 13.2 percent in February owing to the large landmasses at high latitude covered by snow."

The only planets colder than today’s Earth are those planets simulated with no tilt.

"This simulation suggests that planets with either large polar supercontinents or small inventories of water will be the most problematic for life at high obliquity," says Williams.

None of the planets with increased tilt had permanent ice sheets near the equator. This, however, does not guarantee that a world is suitable for life, the researchers note. The extremes of temperature on most of the simulated earths would make it difficult for all but the simplest Earth life forms to survive. Extremes caused because the tilt puts large portions of the planet in 24-hour darkness or 24-hour sunlight for long periods would also inhibit photosynthetic organisms.

The researchers suggest that even with high tilt, life can exist on the planets they modeled.

"Provided the life does not occupy continental surfaces plagued seasonally by the highest temperature, these planets could support more advanced life," the researchers say. "While such worlds exhibit climates that are very different from Earth’s, many will still be suitable for both simple and advanced forms of water-dependent life."

So there is no reason to eliminate Earth-like planets with more tilt than Earth from future searches for life beyond the solar system.

"We have one planet and we have a lot of species on this planet, but it is only one data point," says Williams. "Maybe one day we will figure out everything about life on our own planet, but no where near what is possible elsewhere."