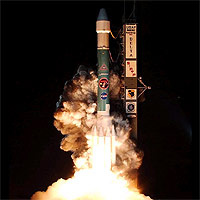 Flying eastward over the Atlantic Ocean, the new observatory entered an Earth-trailing orbit -- the first of its kind -- at about 43 minutes after launch. Five minutes later, the spacecraft separated from the Delta's second and final stage. At about 2:39 a.m. Eastern Daylight Time (11:39 p.m. Pacific Daylight Time, Aug. 24), about 64 minutes after take-off, the NASA Deep Space Network station in Canberra, Australia received the first data from the spacecraft.

"All systems are operating smoothly, and we couldn't be more delighted," said David Gallagher, project manager for the mission at NASA's Jet Propulsion Laboratory, Pasadena, Calif.

The last of NASA's suite of Great Observatories, the Space Infrared Telescope Facility will use infrared detectors to pierce the dusty darkness enshrouding many of the universe's most fascinating objects, including brown dwarfs, planet-forming debris discs around stars and distant galaxies billions of light years away. Past Great Observatories include the Hubble Space Telescope, Chandra X-ray Observatory and Compton Gamma Ray Observatory.

The two-and-one-half to five-year mission is an important bridge to NASA's Origins Program, which seeks to answer the questions: "Where did we come from? Are we alone?"

In-orbit checkout and calibration is scheduled to last 60 days, followed by a 30-day science verification period, after which the observatory is expected to begin its regular science mission.

For more information about the Space Infrared Telescope Facility, visit their Web site at http://sirtf.caltech.edu/.