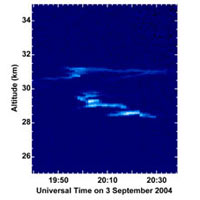 The asteroid's dust trail as seen by lidar at Davis, Antarctica. The plot shows the strength of the vertical laser light scattered back from the atmosphere as a function of time and altitude above mean sea level. The dust trail, blown by the stratospheric winds, moved through the beam.

In a study to be published this week in the journal Nature, scientists from the Australian Antarctic Division, the University of Western Ontario, the Aerospace Corporation, and Sandia and Los Alamos national laboratories found evidence that dust from an asteroid burning up as it descended through Earth’s atmosphere formed a cloud of micron-sized particles significant enough to influence local weather in Antarctica.

Micron-sized particles are big enough to reflect sunlight, cause local cooling, and play a major role in cloud formation, the Nature brief observes. Longer research papers being prepared from the same data for other journals are expected to discuss possible negative effects on the planet’s ozone layer.

'Our observations suggest that [meteors exploding] in Earth’s atmosphere could play a more important role in climate than previously recognized,' the researchers write.

Scientists had formerly paid little attention to asteroid dust, assuming that the burnt matter disintegrated into nanometer-sized particles that did not affect Earth’s environment. Some researchers (and science fiction writers) were more interested in the damage that could be caused by the intact portion of a large asteroid striking Earth.

But the size of an asteroid entering Earth’s atmosphere is significantly reduced by the fireball caused by the friction of its passage. The mass turned to dust may be as much as 90 to 99 percent of the original asteroid. Where does this dust go?

The uniquely well-observed descent of a particular asteroid and its resultant dust cloud gave an unexpected answer.

On Sept. 3, 2004, the space-based infrared sensors of the U.S. Department of Defense detected an asteroid a little less than 10 meters across, at an altitude of 75 kilometers, descending off the coast of Antarctica. U.S. Department of Energy visible-light sensors built by Sandia National Laboratories, a National Nuclear Security Administration lab, also detected the intruder when it became a fireball at approximately 56 kilometers above Earth. Five infrasound stations, built to detect nuclear explosions anywhere in the world, registered acoustic waves from the speeding asteroid that were analyzed by LANL researcher Doug ReVelle. NASA’s multispectral polar orbiting sensor then picked up the debris cloud formed by the disintegrating space rock.

Some 7.5 hours after the initial observation, a cloud of anomalous material was detected in the upper stratosphere over Davis Station in Antarctica by ground-based lidar.

'We noticed something unusual in the data,' says Andrew Klekociuk, a research scientist at the Australian Antarctic division. 'We’d never seen anything like this before — [a cloud that] sits vertically and things blow through it. It had a wispy nature, with thin layers separated by a few kilometers. Clouds are more consistent and last longer. This one blew through in about an hour.'

The cloud was too high for ordinary water-bearing clouds (32 kilometers instead of 20 km) and too warm to consist of known manmade pollutants (55 degrees warmer than the highest expected frost point of human-released solid cloud constituents). It could have been dust from a solid rocket launch, but the asteroid’s descent and the progress of its resultant cloud had been too well observed and charted; the pedigree, so to speak, of the cloud was clear.

Computer simulations agreed with sensor data that the particles’ mass, shape, and behavior identified them as meteorite constituents roughly 10 to 20 microns in size.

Says Dee Pack of Aerospace Corporation, 'This asteroid deposited 1,000 metric tons in the stratosphere in a few seconds, a sizable perturbation.' Every year, he says, 50 to 60 meter-sized asteroids hit Earth.

Peter Brown at the University of Western Ontario, who was initially contacted by Klekociuk, helped analyze data and did theoretical modeling. He points out that climate modelers might have to extrapolate from this one event to its larger implications. '[Asteroid dust could be modeled as] the equivalent of volcanic eruptions of dust, with atmospheric deposition from above rather than below.' The new information on micron-sized particles 'have much greater implications for [extraterrestrial visitors] like Tunguska,' a reference to an asteroid or comet that exploded 8 km above the Stony Tunguska river in Siberia in 1908. About 2150 square kilometers were devastated, but little formal analysis was done on the atmospheric effect of the dust that must have been deposited in the atmosphere.

The Sandia sensors’ primary function is to observe nuclear explosions anywhere on Earth. Their evolution to include meteor fireball observations came when Sandia researcher Dick Spalding recognized that ground-based processing of data might be modified to record the relatively slower flashes due to asteroids and meteoroids. Sandia computer programmer Joe Chavez wrote the program that filtered out signal noise caused by variations in sunlight, satellite rotation, and changes in cloud cover to realize the additional capability. The Sandia data constituted a basis for the energy and mass estimate of the asteroid, says Spalding.

The capabilities of defense-related sensors to distinguish between the explosion of a nuclear bomb and the entry into the atmosphere of an asteroid that releases similar amounts of energy — in this case, about 13 kilotons — could provide an additional margin of world safety. Without that information, a country that experienced a high-energy asteroid burst that penetrated the atmosphere might provoke a military response by leaders who are under the false impression that a nuclear attack is underway, or lead other countries to assume a nuclear test has occurred.