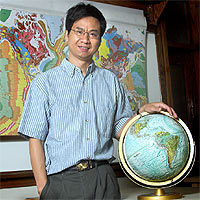 Xiaodong Song, a professor of geology at Illinois, is corresponding author of a paper to appear in the Aug. 26 issue of the journal Science that proves Earth's core rotates faster than its surface.

Scientists have ended a 9-year-old debate by proving that Earth’s core rotates faster than its surface, by about 0.3 to 0.5 degree per year.

'Extraordinary claims require extraordinary proof,' said Xiaodong Song, a professor of geology at the University of Illinois at Urbana-Champaign and corresponding author of a paper to appear in the Aug. 26 issue of the journal Science. 'We believe we have that proof.'

The first observational evidence for differential rotation was presented in 1996 by Song and Paul Richards, a seismologist at the Lamont-Doherty Earth Observatory of Columbia University. For the past nine years, some seismologists have suspected that flaws, or artifacts, in the data were responsible for the purported movement.

The doublets, which were recorded at up to 58 seismic stations in and near Alaska with a time separation of up to 35 years, allowed the researchers to detect temporal changes along the sampling paths.

'The similar seismic waves that passed through the inner core show systematic changes in travel times and wave shapes when the two events of the doublet are separated in time by several years,' Song said. 'The only plausible explanation is a motion of the inner core.'

'Differential rotation is a fundamental dynamic process that goes to the heart of the origin of our planet and how it has evolved,' Song said. 'There is still much to learn about the inner Earth.'