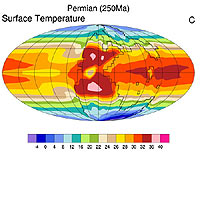 This image shows annual mean surface temperatures in degrees Celsius at the time of the Permian extinction. It is based on a computer simulation generated by the Community Climate System Model at NCAR. (Illustration courtesy Jeff Kiehl, NCAR.)

Scientists at the National Center for Atmospheric Research (NCAR) have created a computer simulation showing Earth's climate in unprecedented detail at the time of the greatest mass extinction in the planet's history. The work gives support to a theory that an abrupt and dramatic rise in atmospheric levels of carbon dioxide triggered the massive die-off 251 million years ago. The research appears in the September issue of Geology.

"The results demonstrate how rapidly rising temperatures in the atmosphere can affect ocean circulation, cutting off oxygen to lower depths and extinguishing most life," says NCAR scientist Jeffrey Kiehl, the lead author.

Kiehl and coauthor Christine Shields focused on the dramatic events at the end of the Permian Era, when an estimated 90 to 95% of all marine species, as well as about 70% of all terrestrial species, became extinct. At the time of the event, higher-latitude temperatures were

18 to 54 degrees Fahrenheit (10 to 30 degrees Celsius) higher than today, and extensive volcanic activity had released large amounts of carbon dioxide and sulfur dioxide into the atmosphere over a 700,000-year period.

To solve the puzzle of how those conditions may have affected climate and life around the globe, the researchers turned to the Community Climate System Model (CCSM). One of the world's premier climate research tools, the model can integrate changes in atmospheric temperatures with ocean temperatures and currents. Research teams had previously studied the Permian extinction with more limited computer models that focused on a single component of Earth's climate system, such as the ocean.

The CCSM indicated that ocean waters warmed significantly at higher latitudes because of rising atmospheric levels of carbon dioxide (CO2), a greenhouse gas. The warming reached a depth of about 10,000 feet (4,000 meters), interfering with the normal circulation process in which colder surface water descends, taking oxygen and nutrients deep into the ocean.

As a result, ocean waters became stratified with little oxygen, a condition that proved deadly to marine life. This in turn accelerated the warming, since marine organisms were no longer removing carbon dioxide from the atmosphere.

"The implication of our study is that elevated CO2 is sufficient to lead to inhospitable conditions for marine life and excessively high temperatures over land would contribute to the demise of terrestrial life," the authors concluded in the article.

The CCSM's simulations showed that ocean circulation was even more stagnant than previously thought. In addition, the research demonstrated the extent to which computer models can successfully simulate past climate events. The CCSM appeared to correctly capture key details of the late Permian, including increased ocean salinity and sea surface temperatures in the high latitudes that paleontologists believe were 14 degrees Fahrenheit (8 degrees Celsius) higher than present.

The modeling presented unique challenges because of limited data and significant geographic differences between the Permian and present-day Earth. The researchers had to estimate such variables as the chemical composition of the atmosphere, the amount of sunlight reflected by Earth's surface back into the atmosphere, and the movement of heat and salinity in the oceans at a time when all the continents were consolidated into the giant land mass known as Pangaea.

"These results demonstrate the importance of treating Earth's climate as a system involving physical, chemical , and biological processes in the atmosphere, oceans, and land surface, all acting in an interactive manner," says Jay Fein, director of NSF's climate dynamics program, which funded the research. "Other studies have reached similar conclusions. What's new here is the application of a detailed version of one of the world's premier climate system models, the CCSM, to understand how rising levels of atmospheric carbon dioxide affected conditions in the world's oceans and land surfaces enough to trigger a massive extinction hundreds of millions of years ago."