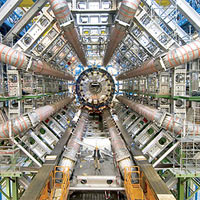 The massive ATLAS detector dwarfs a worker standing in front of it during installation at the Large Hadron Collider. UCSC physicists have been working on the ATLAS project since 1994. Image courtesy of CERN.

The field of particle physics is poised to enter unknown territory with the startup of a massive new accelerator--the Large Hadron Collider (LHC)--in Europe this summer. On September 10, LHC scientists will attempt to send the first beam of protons speeding around the accelerator.

The LHC will put hotly debated theories to the test as it generates a bonanza of new experimental data in the coming years. Potential breakthroughs include an explanation of what gives mass to fundamental particles and identification of the mysterious dark matter that makes up most of the mass in the universe. More exotic possibilities include evidence for new forces of nature or hidden extra dimensions of space and time.

'The LHC is a discovery machine. We don't know what we'll find,' said Abraham Seiden, professor of physics and director of the Santa Cruz Institute for Particle Physics (SCIPP) at the University of California, Santa Cruz.

SCIPP was among the initial group of institutions that spearheaded U.S. participation in the LHC. About half of the entire U.S. experimental particle-physics community has focused its energy on the ATLAS and CMS detectors, the largest of four detectors where experiments will be performed at the LHC. SCIPP researchers have been working on the ATLAS project since 1994. It is one of many international physics and astrophysics projects that have drawn on SCIPP's 20 years of experience developing sophisticated technology for tracking high-energy subatomic particles.

The scale of the LHC is gigantic in every respect--its physical size, the energies attained, the amount of data it will generate, and the size of the international collaboration involved in its planning, construction, and operation. In September, high-energy beams of protons will begin circulating around the LHC's 27-kilometer (16.8-mile) accelerator ring located 100 meters (328 feet) underground at CERN, the European particle physics lab based in Geneva, Switzerland. After a period of testing, the beams will cross paths inside the detectors and the first collisions will take place.

Even before the machine is ramped up to its maximum energy early next year, it will smash protons together with more energy than any previous collider. The debris from those collisions--showers of subatomic particles that the detectors will track and record--will yield results that could radically change our understanding of the physical world.

In a talk at the American Physical Society meeting earlier this year, Seiden gave an overview of the LHC research program, including a rough timeline for reaching certain milestones. One of the most highly anticipated milestones, for example, is detection of the Higgs boson, a hypothetical particle that would fill a major gap in the standard model of particle physics by endowing fundamental particles with mass. Detection of the Higgs boson is most likely to occur in 2010, Seiden said.

But there's no guarantee that the particle actually exists; nature may have found another way to create mass. 'I'm actually hoping we find something unexpected that does the job of the Higgs,' Seiden said.

Technically, the Higgs boson was postulated to explain a feature of particle interactions known as the breaking of electroweak symmetry, and the LHC is virtually guaranteed to explain that phenomenon, according to theoretical physicist Howard Haber.

'We've been debating this for 30 years, and one way or another, the LHC will definitively tell us how electroweak symmetry breaking occurs. That's a fundamental advance,' said Haber, a professor of physics at UCSC.

Haber and other theorists have spent years imagining possible versions of nature, studying their consequences, and describing in detail what the evidence would look like in the experimental data from a particle accelerator such as the LHC. The Higgs boson won't be easy to find, he said. The LHC should produce the particles in abundance (if they exist), but most of them will not result in a very distinctive signal in the detectors.

'It's a tough game. You can only do it by statistical analysis, since there are other known processes that produce events that can mimic a Higgs boson signal,' Haber said.

Evidence to support another important theory--supersymmetry--could show up sooner. In many ways, supersymmetry is a more exciting possibility than the Higgs boson, according to theorist Michael Dine, also a professor of physics at UCSC.

'By itself, the Higgs is a very puzzling particle, so there have been a lot of conjectures about some kind of new physics beyond the standard model. Supersymmetry has the easiest time fitting in with what we know,' Dine said.

'Initially, we'll be looking for things that are known standards to make sure that everything is working properly. In 2009, we could start really looking for new things like supersymmetry,' he said.

The massive ATLAS detector--45 meters (148 feet) long and 25 meters (82 feet) high--has involved more than 2,000 physicists at 166 institutions. Seiden's team at SCIPP has been responsible for developing the silicon sensors and electronics for the detector's inner tracker, which measures the trajectories of charged particles as they first emerge from the site of the collisions.

Seiden is now leading the U.S. effort to develop a major upgrade of ATLAS. The current detector is designed to last for 10 years, and the upgrade will coincide with a planned increase in the luminosity of the proton beams at the LHC (which will then become the 'Super LHC').

'These large projects take such a long time, we have to start early,' Seiden said.

Meanwhile, operation and testing of the current ATLAS detector is already under way at CERN, said Alexander Grillo, a SCIPP research physicist who has been working on the project from the start.

'We've been operating it and looking at cosmic ray particles,' he said. 'Nature gives us these cosmic rays for free, and they're the same kinds of particles we'll see when the machine turns on, so it enables us to check out certain aspects of the detector. But we're very excited to start seeing collisions from the machine.'

ATLAS and the other LHC detectors are designed with 'trigger' systems that ignore most of the signals and record only those events likely to yield interesting results. Out of the hundreds of millions of collisions happening every second inside the detector, only 100 of the most promising events will be selected and recorded in the LHC's central computer system.

'We'll be throwing away a lot of data, so we have to make sure the triggers are working correctly,' Seiden said.

Grillo noted that the ATLAS project has been a great opportunity for UCSC students. Both graduate students and undergraduates have been involved in the development of the detector, along with postdoctoral researchers, research physicists, and senior faculty.

'The graduate students and postdocs get to go to Geneva, but even the undergraduates get a chance to work in a real physics lab and be part of a major international experiment,' Grillo said.

SCIPP's prominent role in the LHC is also a boon for theoretical physicists at UCSC who are not directly involved in the collaboration, such as Dine, Haber, Thomas Banks, and others.

'There is a high level of interaction and camaraderie between theorists and experimentalists at UCSC, which is not the case at other leading institutions,' Dine said. 'For me, it's valuable just in terms of being aware of what's happening on the experimental side.'

According to Haber, the LHC is certain to generate a lot of excitement in the world of physics.

'If nothing were found beyond what we know today, that would be so radical, because it would be in violation of a lot of extremely fundamental principles,' he said.