New 'Nano-Positioners' May Have Atomic-Scale Precision 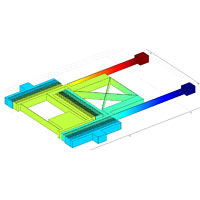 Engineers have created a tiny motorized positioning device that has twice the dexterity of similar devices being developed for applications that include biological sensors and more compact, powerful computer hard drives.

The device, called a monolithic comb drive, might be used as a 'nanoscale manipulator' that precisely moves or senses movement and forces. The devices also can be used in watery environments for probing biological molecules, said Jason Vaughn Clark, an assistant professor of electrical and computer engineering and mechanical engineering, who created the design.

The monolithic comb drives could make it possible to improve a class of probe-based sensors that detect viruses and biological molecules. The sensors detect objects using two different components: A probe is moved while at the same time the platform holding the specimen is positioned. The new technology would replace both components with a single one - the monolithic comb drive.

The innovation could allow sensors to work faster and at higher resolution and would be small enough to fit on a microchip. The higher resolution might be used to design future computer hard drives capable of high-density data storage and retrieval. Another possible use might be to fabricate or assemble miniature micro and nanoscale machines.

Research findings were detailed in a technical paper presented in July during the University Government Industry Micro/Nano Symposium in Louisville. The work is based at the Birck Nanotechnology Center at Purdue's Discovery Park.

Conventional comb drives have a pair of comblike sections with 'interdigitated fingers,' meaning they mesh together. These meshing fingers are drawn toward each other when a voltage is applied. The applied voltage causes the fingers on one comb to become positively charged and the fingers on the other comb to become negatively charged, inducing an attraction between the oppositely charged fingers. If the voltage is removed, the spring-loaded comb sections return to their original position.

By comparison, the new monolithic device has a single structure with two perpendicular comb drives.

Clark calls the device monolithic because it contains comb drive components that are not mechanically and electrically separate. Conventional comb drives are structurally 'decoupled' to keep opposite charges separated.

'Comb drives represent an advantage over other technologies,' Clark said. 'In contrast to piezoelectric actuators that typically deflect, or move, a fraction of a micrometer, comb drives can deflect tens to hundreds of micrometers. And unlike conventional comb drives, which only move in one direction, our new device can move in two directions - left to right, forward and backward - an advance that could really open up the door for many applications.'

Clark also has invented a way to determine the precise deflection and force of such microdevices while reducing heat-induced vibrations that could interfere with measurements.

Current probe-based biological sensors have a resolution of about 20 nanometers.

'Twenty nanometers is about the size of 200 atoms, so if you are scanning for a particular molecule, it may be hard to find,' Clark said. 'With our design, the higher atomic-scale resolution should make it easier to find.'

Properly using such devices requires engineers to know precisely how much force is being applied to comb drive sensors and how far they are moving. The new design is based on a technology created by Clark called electro micro metrology, which enables engineers to determine the precise displacement and force that's being applied to, or by, a comb drive. The Purdue researcher is able to measure this force by comparing changes in electrical properties such as capacitance or voltage.

The research paper describes how the monolithic comb drive works when voltage is applied. The results show independent left-right and forward-backward movement as functions of applied voltage in color-coded graphics.

The findings are an extension of research to create an ultra-precise measuring system for devices having features on the size scale of nanometers, or billionths of a meter. Clark has led research to create devices that 'self-calibrate,' meaning they are able to precisely measure themselves. Such measuring methods and standards are needed to better understand and exploit nanometer-scale devices.

The size of the entire device is less than one millimeter, or a thousandth of a meter. The smallest feature size is about three micrometers, roughly one-thirtieth as wide as a human hair.

'You can make them smaller, though,' Clark said. 'This is a proof of concept. The technology I'm developing should allow researchers to practically and efficiently extract dozens of geometric and material properties of their microdevices just by electronically probing changes in capacitance or voltage.'

In addition to finite element analysis, Clark used a simulation tool that he developed called Sugar.

Clark's research team is installing Sugar on the nanoHub this summer, making the tool available to other researchers. The nanoHub is operated by the Network for Computational Nanotechnology, funded by the National Science Foundation and housed at Purdue's Birck Nanotechnology Center.

The researchers also are in the process of fabricating the devices at the Birck Nanotechnology Center.