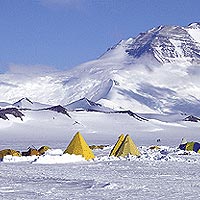 Researchers at the Georgia Institute of Technology have used electron-stimulated desorption to study chemical reactions in icy surfaces. The work could lead to a better understanding of chemical reactions taking place in Antarctica, as well as in stratospheric ice crystals.

A technique borrowed from the surface physics community is helping chemists and atmospheric scientists understand the complex chemical reactions that occur on low-temperature ice.

Known as electron-stimulated desorption (ESD), the technique uses low-energy electrons to locally probe surfaces, differentiating their characteristics from those of the bulk material below them. Using ESD, researchers at the Georgia Institute of Technology have demonstrated that hydrochloric acid (HCl) quickly dissociates upon contact with icy surfaces – even at temperatures well below 100 degrees Kelvin, conditions seen naturally only in the outer solar system.

The work could lead to a better understanding of the complex atmospheric chemistry occurring in stratospheric ice crystals, the polar ice caps, aerosols containing ocean salt – and even the interface between water and DNA.

“These surface science techniques that have been established in the physics community for looking at the molecular structure of adsorbates on surfaces can also be applied to environmentally relevant problems,” said Janine Herring-Captain, a doctoral student in Georgia Tech’s School of Chemistry and Biochemistry. “We can use them to get very basic information regarding some key environmental issues.”

Using an ultra-high vacuum chamber, Herring-Captain used ESD to study HCl interactions with a variety of ice surfaces across a range of temperatures and pressures. The results of her work were presented August 25th at the 228th National Meeting of the American Chemical Society in Philadelphia, PA. Information about the work, believed to be the first electron-energy, phase and temperature-dependent ESD study of cluster ion formation and HCl dissociation on ice surfaces, was published May 13 in Physical Review Letters.

Sponsored by the U.S. Department of Energy’s Office of Science, the work is part of a long-term study of electron collisions with complex targets and reactions on ice of various kinds – a material much more complex than it appears.

“As chemical physicists, we have to look at low temperature ice as a very dynamic surface. Ice is a stage for chemicals to meet each other and then react,” said Thomas Orlando, co-author of the Physical Review Letters paper and chair of Georgia Tech’s School of Chemistry and Biochemistry. “This ice stage is intimately involved in the reactions, and without it, many reactions probably wouldn’t occur.”

Even though extremely cold ice may seem like an improbable surface for many chemical reactions, water molecules in the outer one or two layers of ice remain in motion, even at temperatures found only in the outer solar system. On Earth, warmer ice surfaces are even more active.

“There are molecules moving onto and off of the surface, especially at the poles, where the temperatures are really warm compared to what we study in the laboratory,” noted Herring-Captain. “Things are evaporating and re-condensing on the surface, which is where these atmospheric particles interact. Electron-stimulated desorption is an ideal way to study that surface activity.”

Activity in these outer layers of ice can be dramatically different from what’s happening in the bulk.

“Most of the chemistry that is promoting the development of the ozone hole is happening at the surface because it is gas-phase molecules interacting with these dissolved species that may produce another gas,” she noted. “Using ESD, we can de-couple the surface effects from what is going on in the bulk, which is what most people are seeing.”

The research team, which also included Alex Aleksandrov, chose to study HCl interaction with ice because the protonation process is among the simplest reactions to take place. In their laboratory, they deposited very low concentrations of HCl onto icy surfaces at a variety of temperatures and pressures, and then focused 0.5 square millimeter electron beams on the surface to measure what was happening.

Because the probe uses low-energy electrons, it did not significantly contribute to the reactions.

“Hydrochloric acid is supposed to be one of the reservoir species, but our research suggests it is never really there for long because the dissociation reaction takes place immediately,” said Orlando. “The solvation happens almost instantly. We don’t think HCl is really ever a chemical entity available on the surface for reaction.”

The dissociation effects occur at very low concentrations typical of those seen in atmospheric conditions. However, higher concentrations may change the dynamics, Orlando noted.

The extremely low temperatures and pressures achieved in their laboratory allowed the researchers to isolate the reactions they wanted to study from gas-phase effects that might occur at higher temperatures.

Because the studies were done at extremely low temperatures, the results have been controversial, Orlando admits.

In related work, the research team is also studying formation of ion clusters from salt water and the interaction of electrons with DNA. Using a liquid jet injecting salt water into a vacuum, they found that the salt caused the water molecules to re-orient themselves at the interface, boosting the formation of ice clusters.

“When you think about salt and water, you expect to see a simple well-behaved solution,” Orlando explained. “But at even low temperatures, salt and the associated solvation dynamics and structures are very complicated.”