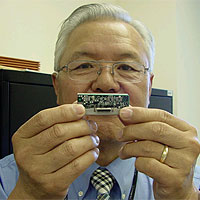 How accurate is your kitchen clock? Probably good enough to get you to work on time, but perhaps not good enough for extremely precise ship and aircraft navigation, ground to outer space communications, or missile guidance.

In October 2003 the Office of Naval Research will unveil the performance of the next-generation, super-accurate clock no bigger than a matchbox. The Ultra-miniature Rubidium (Rb) Atomic Clock, 40 cubic centimeters in volume and using a minuscule one watt of power, doesn’t weigh much more than a matchbox either.

And...it will lose only about one second every 10,000 years. Dr. John Kim, who oversees navigation and timekeeping technology programs at ONR, points out that while commercial atomic clocks already are available, they’re relatively large and bulky. A typical Cesium beam atomic clock measures about 4,800 cubic centimeters in volume (about the size of a large backpack) and consumes up to 50 watts of power.

Kernco, Inc., of Danvers, MA, is a longtime builder of precision timing devices. In October, Kernco will deliver a field-tested unit of the Ultra-miniature Rb Atomic Clock to ONR that, Kim points out, is about half the size of the current commercially available ones, but improves on power needs by a factor of four. The tiny size of the Kernco clock, he says, will permit new degrees of design flexibility for systems, especially aircraft, which place a high premium on size and weight.

ONR awarded Kernco a contract in Nov. 2000 for development of the 40 cc clock. The company is a long time builder of precision timing devices.

The Kernco laser-based Ultra-miniature Rubidium Atomic Clock that is entirely optical in nature, a key breakthrough for miniaturizing atomic clocks. The laser light source is derived from a revolutionary technology breakthrough called Vertical Cavity Surface Emitting Laser (VCSEL), developed to meet the needs of fiber-optic communications industry for extremely compact lasers. The difference between this new clock and other atomic clocks are the size, the weight, the power consumption, the transportability, and the price. The Kernco clock is a tactical grade atomic clock.

Kernco has already begun work for ONR on an even smaller 10 cc Rubidium Atomic Clock, but even that will not be the last word: other agencies are researching the development of the still-more accurate atomic clock.