Scientists Give a Hand(edness) to the Search for Alien Life 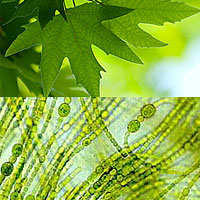 Light becomes polarized in detectable ways when reflected from chlorophyll and other chiral molecules necessary to life, so scientists working at NIST have built a device that can detect this polarization—potentially offering a way to find extraterrestrial life from great distances. Their device has already proved itself able to discern the polarized light scattered from the chlorophyll in leaves and also cyanobacteria (below), one-celled organisms that evolved early in the history of life on Earth.

Visiting aliens may be the stuff of legend, but if a scientific team working at the National Institute of Standards and Technology (NIST) is right, we may be able to find extraterrestrial life even before it leaves its home planet—by looking for left- (or right-) handed light.

The technique the team has developed* for detecting life elsewhere in the universe will not spot aliens directly. Rather, it could allow spaceborne instruments to see a telltale sign that life may have influenced a landscape: a preponderance of molecules that have a certain “chirality,” or handedness. A right-handed molecule has the same composition as its left-handed cousin, but their chemical behavior differs. Because many substances critical to life favor a particular handedness, Thom Germer and his colleagues think chirality might reveal life’s presence at great distances, and have built a device to detect it.

“You don’t want to limit yourself to looking for specific materials like oxygen that Earth creatures use, because that makes assumptions about what life is,” says Germer, a physicist at NIST. “But amino acids, sugars, DNA—each of these substances is either right- or left-handed in every living thing.”

Many molecules not associated with life exhibit handedness as well. But when organisms reproduce, their offspring possess chiral molecules that have the same handedness as those in their parents’ bodies. As life spreads, the team theorizes, the landscape will eventually have a large amount of molecules that favor one handedness.

“If the surface had just a collection of random chiral molecules, half would go left, half right,” Germer says. “But life’s self-assembly means they all would go one way. It’s hard to imagine a planet’s surface exhibiting handedness without the presence of self assembly, which is an essential component of life.”

Because chiral molecules reflect light in a way that indicates their handedness, the research team built a device to shine light on plant leaves and bacteria, and then detect the polarized reflections from the organisms’ chlorophyll from a short distance away. The device detected chirality from both sources.

The team intends to improve its detector so it can look at pond surfaces and then landscape-sized regions on Earth. Provided the team continues to get good results, Germer says, they will propose that it be built into a large telescope or mounted on a space probe.

“We need to be sure we get a signal from our own planet before we can look at others,” he says. “But what’s neat about the concept is that it is sensitive to something that comes from the process behind organic self-assembly, but not necessarily life as we know it.”

Funding for this research was provided by the Space Telescope Science Institute and the European Space Agency.

News Story Origin and Copyright: NIST
Click here for the original news release.
'On the mountains of truth you can never climb in vain: either you will reach a point higher up today, or you will be training your powers so that you will be able to climb higher tomorrow.'