Robots Swim With the Fishes 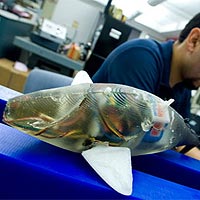 Pablo Valdivia Y Alvarado, a research affiliate in the Department of Mechanical Engineering, works in his lab on a robotic fish he created with Professor Kamal Youcef-Toumi. The robot is designed to more easily maneuver into areas where traditional underwater autonomous vehicles cannot go.

Borrowing from Mother Nature, a team of MIT researchers has built a school of swimming robo-fish that slip through the water just as gracefully as the real thing, if not quite as fast.

'Given the (robotic) fish's robustness, it would be ideal as a long-term sensing and exploration unit. Several of these could be deployed, and even if only a small percentage make it back there wouldn't be a terrible capital loss due to their low cost,' says Valdivia Y Alvarado, a recent MIT PhD recipient in mechanical engineering.

Robotic fish are not new: In 1994, MIT ocean engineers demonstrated Robotuna, a four-foot-long robotic fish. But while Robotuna had 2,843 parts controlled by six motors, the new robotic fish, each less than a foot long, are powered by a single motor and are made of fewer than 10 individual components, including a flexible, compliant body that houses all components and protects them from the environment. The motor, placed in the fish's midsection, initiates a wave that travels along the fish's flexible body, propelling it forward.

The robofish bodies are continuous (i.e., not divided into different segments), flexible and made from soft polymers. This makes them more maneuverable and better able to mimic the swimming motion of real fish, which propel themselves by contracting muscles on either side of their bodies, generating a wave that travels from head to tail.

As part of his doctoral thesis, Valdivia Y Alvarado created a model to calculate the optimal material properties distributions along the robot's body to create a fish with the desired speed and swimming motion. The model, which the researchers initially proposed in the journal Dynamic Systems Measurements and Control (ASME), also takes into account the robot's mass and volume. A more detailed model is described in Valdivia Y Alvarado's thesis and will soon be published along with new applications by the group.

Other researchers, including a team at the University of Essex, have developed new generations of robotic fish using traditional assembly of rigid components to replicate the motions of fish, but the MIT team is the only one using controlled vibrations of flexible bodies to mimic biological locomotion.

'With these polymers, you can specify stiffness in different sections, rather than building a robot with discrete sections,' says Youcef-Toumi. 'This philosophy can be used for more than just fish' - for example, in robotic prosthetic limbs.
Mimicking fish

With motors in their bellies and power cords trailing as they swim, the robo-fish might not be mistaken for the real thing, but they do a pretty good fish impersonation.

The team's first prototypes, about five inches long, mimic the carangiform swimming technique used by bass and trout. Most of the movement takes place in the tail end of the body. Fish that use this type of motion are generally fast swimmers, with moderate maneuverability.

Later versions of the robo-fish, about eight inches long, swim like tuna, which are adapted for even higher swimming speeds and long distances. In tuna, motion is concentrated in the tail and the peduncle region (where the tail attaches to the body), and the amplitude of body motions in this region is greater than in carangiform fish.

Real fish are exquisitely adapted to moving through their watery environment, and can swim as fast as 10 times their body length per second. So far, the MIT researchers have gotten their prototypes close to one body length per second - much slower than their natural counterparts but faster than earlier generations of robotic fish.

The new robo-fish are also more durable than older models - with their seamless bodies, there is no chance of water leaking into the robots and damaging them. Several four-year-old prototypes are still functioning after countless runs through the testing tank, which is filled with tap water.

Current prototypes require 2.5 to 5 watts of power, depending on the robot's size. That electricity now comes from an external source, but in the future the researchers hope to power the robots with a small internal battery.

Later this fall, the researchers plan to expand their research to more complex locomotion and test some new prototype robotic salamanders and manta rays.

'The fish were a proof of concept application, but we are hoping to apply this idea to other forms of locomotion, so the methodology will be useful for mobile robotics research - land, air and underwater - as well,' said Valdivia Y Alvarado.

The work was funded by the Singapore-MIT Alliance and Schlumberger Ltd.