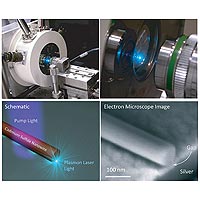 TOP TWO: A bright point of light from a single plasmon laser emanates from the optical setup used by UC Berkeley researchers (enlarged closeup at right). These semiconductor lasers — the world's smallest — are extremely efficient, so the small amount of scattered light is clearly visible, even in ambient room lighting. Camera saturation of the bright laser light gives the impression of a larger spot. (Courtesy of Xiang Zhang Lab/UC Berkeley)

BOTTOM TWO: Left: Light being compressed and sustained in the 5 nanometer gap — smaller than a protein molecule — between a nanowire and underlying silver surface. Right: Electron microscope image of the hybrid design shown in the schematic. (Courtesy of Xiang Zhang Lab/UC Berkeley)

Researchers at the University of California, Berkeley, have reached a new milestone in laser physics by creating the world's smallest semiconductor laser, capable of generating visible light in a space smaller than a single protein molecule.

This breakthrough, described in an advanced online publication of the journal Nature on Sunday, Aug. 30, breaks new ground in the field of optics. The UC Berkeley team not only successfully squeezed light into such a tight space, but found a novel way to keep that light energy from dissipating as it moved along, thereby achieving laser action.

'This work shatters traditional notions of laser limits, and makes a major advance toward applications in the biomedical, communications and computing fields,' said Xiang Zhang, director at UC Berkeley of a National Science Foundation (NSF) Nanoscale Science and Engineering Center, and head of the research team behind this work

The achievement helps enable the development of such innovations as nanolasers that can probe, manipulate and characterize DNA molecules; optics-based telecommunications many times faster than current technology; and optical computing in which light replaces electronic circuitry with a corresponding leap in speed and processing power.

While it is traditionally accepted that an electromagnetic wave - including laser light - cannot be focused beyond the size of half its wavelength, research teams around the world have found a way to compress light down to dozens of nanometers by binding it to the electrons that oscillate collectively at the surface of metals. This interaction between light and oscillating electrons is known as surface plasmons.

Scientists have been racing to construct surface plasmon lasers that can sustain and utilize these tiny optical excitations. However, the resistance inherent in metals causes these surface plasmons to dissipate almost immediately after being generated, posing a critical challenge to achieving the buildup of the electromagnetic field necessary for lasing.

Zhang, a professor of mechanical engineering, and his research team took a novel approach to stem the loss of light energy by pairing a cadmium sulfide nanowire - 1,000 times thinner than a human hair - with a silver surface separated by an insulating gap of only 5 nanometers, the size of a single protein molecule. In this structure, the gap region stores light within an area 20 times smaller than its wavelength. Because light energy is largely stored in this tiny non-metallic gap, loss is significantly diminished.

With the loss finally under control through this unique 'hybrid' design, the researchers could then work on amplifying the light.

'When you are working at such small scales, you do not have much space to play around with,' said Rupert Oulton, the research associate in Zhang's lab who first theorized this approach last year and the study's co-lead author. 'In our design, the nanowire acts as both a confinement mechanism and an amplifier. It's pulling double duty.'

Recently, researchers from Norfolk State University reported lasing action of gold spheres in a dye-filled, glasslike shell immersed in a solution. The dye coupled to the gold spheres could generate surface plasmons when exposed to light.

The UC Berkeley researchers used semiconductor materials and fabrication technologies that are commonly employed in modern electronics manufacturing. By engineering hybrid surface plasmons in the tiny gap between semiconductors and metals, they were able to sustain the strongly confined light long enough that its oscillations stabilized into the coherent state that is a key characteristic of a laser.

'What is particularly exciting about the plasmonic lasers we demonstrated here is that they are solid state and fully compatible with semiconductor manufacturing, so they can be electrically pumped and fully integrated at chip-scale,' said Volker Sorger, a Ph.D. student in Zhang's lab and study co-lead author.

Scientists hope to eventually shrink light down to the size of an electron's wavelength, which is about a nanometer, or one-billionth of a meter, so that the two can work together on equal footing.

'The advantages of optics over electronics are multifold,' added Thomas Zentgraf, a post-doctoral fellow in Zhang's lab and another co-lead author of the Nature paper. 'For example, devices will be more power efficient at the same time they offer increased speed or bandwidth.'

In addition to the three co-lead authors, other co-authors of the paper are Renmin Ma and Lun Dai from Peking University, and Christopher Gladden and Guy Bartal from Zhang's research group.

This work is supported by the U.S. Air Force Office of Scientific Research and the NSF.