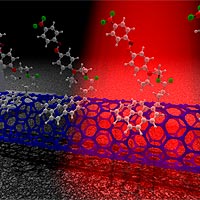 This diagram depicts a representation of chromophores attaching to a transistor made from a single carbon nanotube.

Researchers at Sandia National Laboratories have created the first carbon nanotube device that can detect the entire visible spectrum of light, a feat that could soon allow scientists to probe single molecule transformations, study how those molecules respond to light, observe how the molecules change shapes, and understand other fundamental interactions between molecules and nanotubes.

Carbon nanotubes are long thin cylinders composed entirely of carbon atoms. While their diameters are in the nanometer range (1-10), they can be very long, up to centimeters in length.

The carbon-carbon bond is very strong, making carbon nanotubes very robust and resistant to any kind of deformation. To construct a nanoscale color detector, Sandia researchers took inspiration from the human eye, and in a sense, improved on the model.

When light strikes the retina, it initiates a cascade of chemical and electrical impulses that ultimately trigger nerve impulses. In the nanoscale color detector, light strikes a chromophore and causes a conformational change in the molecule, which in turn causes a threshold shift on a transistor made from a single-walled carbon nanotube.

“In our eyes the neuron is in front of the retinal molecule, so the light has to transmit through the neuron to hit the molecule,” says Sandia researcher Xinjian Zhou. “We placed the nanotube transistor behind the molecule—a more efficient design.”

The idea of carbon nanotubes being light sensitive has been around for a long time, but earlier efforts using an individual nanotube were only able to detect light in narrow wavelength ranges at laser intensities. The Sandia team found that their nanodetector was orders of magnitude more sensitive, down to about 40 W/m2—about 3 percent of the density of sunshine reaching the ground. “Because the dye is so close to the nanotube, a little change turns into a big signal on the device,” says Zhou.

The research is in its second year of internal Sandia funding and is based on Léonard’s collaboration with the University of Wisconsin to explain the theoretical mechanism of carbon nanotube light detection. Léonard literally wrote the book on carbon nanotubes—The Physics of Carbon Nanotubes, published September 2008.

Léonard says the project draws upon Sandia’s expertise in both materials physics and materials chemistry. He and Wong laid the groundwork with their theoretical research, with Wong completing the first-principles calculations that supported the hypothesis of how the chromophores were arranged on the nanotubes and how the chromophore isomerizations affected electronic properties of the devices.

To construct the device, Zhou and Krafcik first had to create a tiny transistor made from a single carbon nanotube. They deposited carbon nanotubes on a silicon wafer and then used photolithography to define electrical patterns to make contacts.

The final piece came from Vance and Zifer, who synthesized molecules to create three types of chromophores that respond to either the red, green, or orange bands of the visible spectrum. Zhou immersed the wafer in the dye solution and waited a few minutes while the chromophores attached themselves to the nanotubes.

The team reached their goal of detecting visible light faster than they expected—they thought the entire first year of the project would be spent testing UV light. Now, they are looking to increase the efficiency by creating a device with multiple nanotubes.

“Detection is now limited to about 3 percent of sunlight, which isn’t bad compared with a commercially available digital camera,” says Zhou. “I hope to add some antennas to increase light absorption.”

A device made with multiple carbon nanotubes would be easier to construct and the resulting larger area would be more sensitive to light. A larger size is also more practical for applications.

Now, they are setting their sites on detecting infrared light. “We think this principle can be applied to infrared light and there is a lot of interest in infrared detection,” says Vance. “So we’re in the process of looking for dyes that work in infrared.”

This research eventually could be used for a number of exciting applications, such as an optical detector with nanometer scale resolution, ultra-tiny digital cameras, solar cells with more light absorption capability, or even genome sequencing. The near-term purpose, however, is basic science.

“A large part of why we are doing this is not to invent a photo detector, but to understand the processes involved in controlling carbon nanotube devices,” says Léonard.

The next step in the project is to create a nanometer-scale photovoltaic device. Such a device on a larger scale could be used as an unpowered photo detector or for solar energy. “Instead of monitoring current changes, we’d actually generate current,” says Vance. “We have an idea of how to do it, but it will be a more challenging fabrication process.”