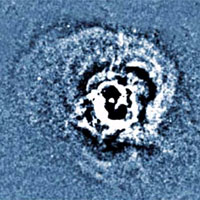 A 53-hour NASA Chandra X-ray observation of the central region of the Perseus galaxy cluster has revealed wavelike features that appear to be sound waves. The features were discovered by using a special image-processing technique to bring out subtle changes in brightness.

These sound waves are thought to have been produced by explosive events occurring around a supermassive black hole, seen in the bright white spot, in Perseus A, the huge galaxy at the center of the cluster. The pitch of the sound waves translates into the note of B flat, 57 octaves below middle-C. This frequency is over a million billion times deeper than the limits of human hearing, so the sound is much too deep to be heard.

The image also shows two vast, bubble-shaped cavities, each about 50 thousand light years wide, extending away from the central supermassive black hole. These cavities, which are bright sources of radio waves, are not really empty, but filled with high-energy particles and magnetic fields. They push the hot X-ray emitting gas aside, creating sound waves that sweep across hundreds of thousands of light years.

The detection of intergalactic sound waves may solve the long-standing mystery of why the hot gas in the central regions of the Perseus cluster has not cooled over the past ten billion years to form trillions of stars. As sounds waves move through gas, they are eventually absorbed and their energy is converted to heat. In this way, the sound waves from the supermassive black hole in Perseus A could keep the cluster gas hot.

The explosive activity occurring around the supermassive black hole is probably caused by large amounts of gas falling into it, perhaps from smaller galaxies that are being cannibalized by Perseus A. The dark blobs in the central region of the Chandra image may be fragments of such a doomed galaxy.

NASA's Chandra X-ray Observatory detected sound waves, for the first time, from a super-massive black hole. The "note" is the deepest ever detected from an object in the universe. The tremendous amounts of energy carried by these sound waves may solve a longstanding problem in astrophysics.

The black hole resides in the Perseus cluster, located 250 million light years from Earth. In 2002, astronomers obtained a deep Chandra observation that shows ripples in the gas filling the cluster. These ripples are evidence for sound waves that have traveled hundreds of thousands of light years away from the cluster's central black hole.

"We have observed the prodigious amounts of light and heat created by black holes, now we have detected the sound," said Andrew Fabian of the Institute of Astronomy (IoA) in Cambridge, England, and leader of the study.

In musical terms, the pitch of the sound generated by the black hole translates into the note of B flat. But, a human would have no chance of hearing this cosmic performance, because the note is 57 octaves lower than middle-C (by comparison a typical piano contains only about seven octaves). At a frequency over a million, billion times deeper than the limits of human hearing, this is the deepest note ever detected from an object in the universe.

"The Perseus sound waves are much more than just an interesting form of black hole acoustics," said Steve Allen, also of the IoA and a co-investigator in the research. "These sound waves may be the key in figuring out how galaxy clusters, the largest structures in the universe, grow," Allen said.

For years astronomers have tried to understand why there is so much hot gas in galaxy clusters and so little cool gas. Hot gas glowing with X-rays should cool, and the dense central gas should cool the fastest. The pressure in this cool central gas should then fall, causing gas further out to sink in towards the galaxy, forming trillions of stars along the way. Scant evidence has been found for such a flow of cool gas or star formation. This forced astronomers to invent several different ways to explain why the gas contained in clusters remained hot, and, until now, none of them was satisfactory.

Heating caused by a central black hole has long been considered a good way to prevent cluster gas from cooling. Although jets have been observed at radio wavelengths, their effect on cluster gas was unclear since this gas is only detectable in X-rays, and early X-ray observations did not have Chandra's ability to find detailed structure.

Previous Chandra observations of the Perseus cluster showed two vast, bubble-shaped cavities in the cluster gas extending away from the central black hole. Jets of material pushing back the cluster gas have formed these X-ray cavities, which are bright sources of radio waves. They have long been suspected of heating the surrounding gas, but the mechanism was unknown. The sound waves, seen spreading out from the cavities in the recent Chandra observation, could provide this heating mechanism.

A tremendous amount of energy is needed to generate the cavities, as much as the combined energy from 100 million supernovae. Much of this energy is carried by the sound waves and should dissipate in the cluster gas, keeping the gas warm and possibly preventing a cooling flow. If so, the B-flat pitch of the sound wave, 57 octaves below middle-C, would have remained roughly constant for about 2.5 billion years.

Perseus is the brightest cluster of galaxies in X-rays, and therefore was a perfect Chandra target for finding sound waves rippling through the hot cluster gas. Other clusters show X-ray cavities, and future Chandra observations may yet detect sound waves in these objects.