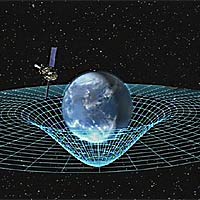 Artist concept of Gravity Probe B orbiting the Earth to measure space-time, a four-dimensional description of the universe including height, width, length, and time. (NASA/MSFC)

Gravity Probe B (GP-B), a NASA spacecraft to test two predictions of Albert Einstein's general theory of relativity, achieved a major milestone this past week with the completion of the Initialization and Orbit Calibration (IOC) phase of its mission and the transition into the science phase. The GP-B mission is now one step closer to shedding new light on the fundamental properties of our universe.

"This is the moment we have been waiting for," said Francis Everitt, GP-B science Principal Investigator at Stanford University. "It represents a magnificent effort by the entire Stanford-NASA-Lockheed Martin team."

The GP-B spacecraft was launched on April 20, 2004 from Vandenberg Air Force Base, Calif., aboard a Boeing Delta II expendable launch vehicle. For the past four months, GP-B has been orbiting 400 miles above Earth, completing system checkouts and fine-tuning one of the most sophisticated science instruments ever put in orbit. On August 27 the spacecraft began science data collection.

"It's been a long, amazing road to get to this point," said Rex Geveden, deputy director of NASA's Marshall Space Flight Center in Huntsville, AL. "When Gravity Probe B was first proposed more than 40 years ago, the technology required for this experiment did not yet exist. At least nine new technologies had to be invented and perfected, with the program's advances only possible through breakthroughs in cryogenics, drag-free satellite technology, and new manufacturing and measuring technologies."

The spacecraft uses four ultra-precise gyroscopes to test two extraordinary predictions of Einstein's 1916 theory that space and time are distorted by the presence of massive objects. Specifically, it is testing two effects: 1) the geodetic effect--the amount by which the Earth warps local spacetime in which it resides, and 2) the frame-dragging effect--the amount by which the rotating Earth drags local spacetime around with it.

"It's great to be in our science mode," said Gaylord Green, GP-B Program Manager at Stanford University. "The team is ecstatic that the demanding IOC phase is over and the science phase has begun. Most importantly, all systems are meeting or exceeding the requirements of the mission."

At launch, the spacecraft's Dewar (the largest ever put in orbit) contained approximately 650 gallons of superfluid helium-enough to maintain the gyroscopes in a cryogenic state for an estimated 16 months. The GP-B mission time line originally specified two months for initialization, checkout, and instrument tuning, 13 months of relativity data collection, and one final month of instrument re-calibration. The IOC phase actually required a little over four months to complete. Although this results in a slightly shorter data collection period than originally planned, GP-B will significantly surpass its mission performance requirements.

Tuning up the Attitude and Translation Control system to achieve the extraordinarily precise pointing and drag-free positioning requirements of the spacecraft, as well as refining the set-up up the science gyros, accounted for the IOC extension. "These are items that cannot be tested on the ground," said Gaylord Green. "Using the extra time required for the checkout phase, the team obtained invaluable information about the GP-B science instrument."

The science phase is the heart of the GP-B mission. During this phase, at least twice a day, data is relayed from Earth-based ground stations or NASA's data relay satellites to the GP-B Mission Operations Center at Stanford University in Stanford, Calif. This data includes space vehicle and instrument performance information, as well as the very precise measurements of the gyroscopes' spin-axis alignment relative to its guide star, IM Pegasi. Over the course of a year, the anticipated spin axis drift for the geodetic effect is a minuscule angle of 6,614.4 milliarcseconds, and the anticipated spin axis drift for the frame-dragging effect is even smaller, only 40.9 milliarcseconds. This angle is so small that if someone were to climb a slope of 40.9 milliarcseconds for 100 miles, he would rise only one inch in altitude, measured to an accuracy of better than 1/100th of an inch.

The GP-B mission has already achieved many extraordinary accomplishments:

The GP-B program will not release the scientific results obtained during the mission until after the science phase has concluded. It is critically important to thoroughly analyze the data to ensure its accuracy and integrity prior to releasing the results.

NASA's Marshall Space Flight Center manages the GP-B program. NASA's prime contractor for the mission, Stanford University, conceived the experiment and is responsible for the design and integration of the science instrument, as well as for mission operations and data analysis. Lockheed Martin, a major subcontractor, designed, integrated and tested the space vehicle and built some of its major payload components.