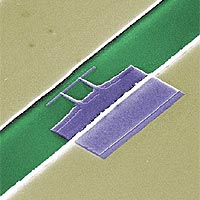 In circuit QED experiments, a photon trapped between the transmission lines (tan) couples to the artificial atom, or qubit (purple). The base of the qubit is about 9 microns long.

Using integrated circuit fabrication techniques, a team of researchers from Yale University has bound a single photon to a superconducting device engineered to behave like a single atom, forming an artificial molecule. It’s the first experimental result in a field Yale professors Robert Schoelkopf and Steven Girvin have dubbed Circuit Quantum Electrodynamics.

The superconducting devices can be operated as qubits, the basic element of information storage in the field of quantum computing. In the September 9th issue of the journal Nature, Andreas Wallraff and his colleagues present telltale evidence that their qubit was coupling to a microwave photon, sharing energy in much the same way electrons are shared when two atoms combine to form a molecule. They offered two suggestions for naming the new, combined state: phobit or quton.

Qutons have been made before, the first about 12 years ago. But by using artificial atoms for their qubits instead of real ones, and microwave transmission lines instead of optical cavities, the Yale physicists were able to shrink a roomful of experimental apparatus onto a chip less than 1 square centimeter (or less than ¼ square inch) in size. They have also improved the coupling between resonator and “atom” by a factor of about 1000, which will help them explore fundamental interactions of light and matter. Soon they will try to control several qubits on one chip, using photons to connect them together in a prototype architecture for quantum computing and quantum cryptography.