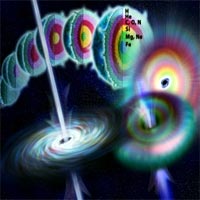 Astronomers believe that the gamma-ray burst observed on September 4, 2005, may have originated with the explosion of a star that lived and died some 13 billion years ago, not long after the Big Bang brought the universe itself into being.

This particular star was a hulking specimen that had at least 30 times the mass of our own Sun, which made it quite a bit bigger than almost any star that exists today. Nonetheless, it was destined for a very short life. Because of the star's huge mass, gravity caused the hydrogen gas in its core to become extraordinarily hot and dense, which in turn made the thermonuclear reactions there extraordinarily fierce. Soon, all the hydrogen in the core had been converted to helium. Then, when the helium 'ash' became dense enough and hot enough, it, too, ignited to form elements such as carbon, nitrogen and oxygen.

Indeed, this cycle was repeated again and again, until the interior of the star acquired a kind of onion structure. First there was an outer shell where hydrogen was fusing into helium. Then inside that, there was a shell where helium was burning. Then came shells for carbon, oxygen and nitrogen; silicon; and magnesium and neon. And finally, at the very center, there was a core of iron nuclei - the ash from all the layers of thermonuclear fusion above it.

But iron was the end. Iron nuclei can neither fuse nor fission; they are as stable as atomic nuclei can get. So the iron in the core of the star could only accumulate? accumulate? accumulate. Before long, in fact, this steady accumulation of iron took the core through a kind of gravitational tipping point - whereupon it suddenly and catastrophically collapsed to form a black hole. The resulting release of energy quickly tore the star apart.

Such explosions are actually fairly common in the universe today; we know them as 'supernovas.' But unlike many supernovas, which tend to produce spherical blast waves, this one seems to have focused most of its explosive energy into two back-to-back jets of ultra-high-energy particles and radiation. Astronomers believe that this may have been the result of gas from the core that tried to fall into the black hole, but couldn't because it was rotating too fast. Instead, the gas settled into a very rapidly rotating 'accretion disk' that surrounded the hole like a flattened donut. Only the gas around the inner rim of the disk could spiral into the hole. And when it did, it released vast amounts of energy that had no way to escape - except along the axis of the disk. Thus the back-to-back jets.

Astronomers have used a close collaboration between space-based and ground-based telescopes to detect the most distant cosmic explosion yet seen: a gamma-ray burst from the edge of the visible universe.

This powerful burst, likely marking the death of a massive star as it collapsed into a black hole, was detected on Sept. 4. The burst comes from an era soon after stars and galaxies first formed, about 500 million to 1 billion years after the Big Bang. The science team cannot yet determine the nature of the exploded star; a detailed analysis is forthcoming.

'This is uncharted territory,' said Dr. Daniel Reichart of the University of North Carolina at Chapel Hill, who spearheaded the distance measurement. 'This burst smashes the old distance record by 500 million light years. We are finally starting to see the remnants of some of the oldest objects in the universe.'

Only one quasar has been discovered at a greater distance. However, whereas quasars are super-massive black holes containing the mass of billions of stars, this burst comes from a single star. Scientists find it puzzling how a single star could generate enough energy to be seen across the universe. They speculate that this early star may be physically different from the kinds that exist today. Alternatively, the star may be focusing all the energy of the explosion into narrow 'jets' of particles and radiation, with one jet by chance pointed toward Earth.

Whatever the explanation, the discovery is heralded as a major breakthrough in the study of the early universe. Few quasars are seen at exceedingly far distances, at the earliest epoch of star and galaxy formation, despite exhaustive searches. Yet very distant gamma-ray bursts might be plentiful, according to Prof. Donald Lamb of the University of Chicago, who with Reichart had predicted the detection of such events.

'This is what we've been hoping and waiting for,' Lamb said. He anticipates the discovery of scores, if not hundreds, of very distant gamma-ray bursts in the coming years. These bursts would provide information about where and when the earliest stars formed and what they were made of. Traveling across the universe, the light from the bursts would also contain information about all the material it passed through on its long journey towards us. 'The fun is just beginning,' Lamb said.

Scientists measure cosmic distances via redshift, the extent to which light is 'shifted' towards the red (lower energy) part of the electromagnetic spectrum during its long journey across the universe. The greater the distance, the higher the redshift.

Quasars, the famous distance record holder in the past, are actually most common around redshift 2, corresponding to a distance of about 10 billion light years. They virtually disappear at about redshift 5, corresponding to about 12 billion light years. Only a handful of quasars have been detected beyond redshift 6. Yet gamma-ray bursts might be detectable as far as redshift 20, Lamb said. This makes gamma-ray bursts, in Lamb's opinion, the premier method to probe the early universe: a redshift of 10 to 20 would correspond to the era when the very first stars began to form in the universe, about 200 million years after the Big Bang.

The Sept. 4 burst, named GRB 050904 for the date it was detected, had a redshift of 6.29, which translates to a distance of about 13 billion light years from Earth. (The universe is thought to be 13.7 billion years old.) The previous most distant gamma-ray burst had a redshift of 4.5. The most distant quasar known is at redshift 6.4. GRB 050904 was also very long, lasting more than 200 seconds. Most bursts last only about 10 seconds.

The observation of the burst and its fading afterglow was a true worldwide effort, involving scientists on four continents using a multitude of telescopes.

The first alert was raised by the National Aeronautics and Space Administration's (NASA's) Swift satellite, which was launched on Nov. 20, 2004. 'We designed Swift to look for faint bursts coming from the edge of the Universe,' said Dr. Neil Gehrels of NASA Goddard Space Flight Center, Greenbelt, Md., Swift principal investigator. And in this case, it did just that. Within minutes after detecting the short-lived pulse of gamma rays from GRB 050904, Swift had automatically determined where in the sky they were coming from and relayed the coordinates to scientists around the world via e-mail, Web sites and cell phone.

One of the first groups to respond was Reichart's team from UNC. It was able to observe the afterglow of the burst with the Southern Observatory for Astrophysical Research (SOAR) telescope atop Cerro Pachon, Chile. Dedicated in April 2004, the 4.1-meter SOAR telescope is funded by NSF through the U.S. National Optical Astronomy Observatory; the Ministry of Science of Brazil; Michigan State University; and UNC.

Over the next several nights, the team used a light filtering technique at SOAR and at the 8.2-meter Gemini South telescope, also on Cerro Pachon, to calculate a redshift of greater than 6. Reichart and his colleagues also went to an adjacent peak, Cerro Tololo, to search for the afterglow with the still-incomplete PROMPT array. This facility will ultimately have six Panchromatic Robotic Optical Monitoring and Polarimetry Telescopes, all designed to respond very rapidly to sudden astronomical events like this one. The fact that PROMPT's working telescopes did not see the afterglow was actually a confirmation of the SOAR result, since it provided further evidence that this was a very distant burst redshifted to an infrared energy below PROMPT's range in visible light.

Both Gemini and SOAR represent international partnerships funded in part by the NSF.

Building upon these measurements, a team led by Nobuyuki Kawai of the Tokyo Institute of Technology used the 8.2-meter Subaru telescope on Mauna Kea, Hawaii, to confirm the distance and fine-tune the redshift measurement to 6.29 via a technique called spectroscopy. The Subaru telescope is operated by the National Astronomical Observatory of Japan.

Since then, many other observatories have observed the burst's afterglow.

'The earliest stars exploded eons ago; we know very little about them,' said Josh Haislip, a UNC undergraduate who analyzed data from SOAR and who was supported by a grant from NSF's Research Experience for Undergraduates program. 'One of the best ways we can study them is by watching for their explosions. Swift can pinpoint the location of the explosions, and telescopes such as SOAR can study the composition of the debris to understand where and when these stars formed and what they were made of."