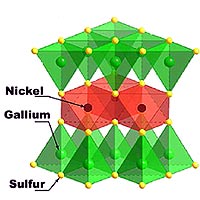 A crystal diagram shows the triangle-shaped atomic structure of nickel gallium sulfide, which may have an unusual magnetic 'liquid' state at low temperatures. Red spheres represent nickel, green spheres are gallium, and yellow are sulfur.

A novel material that may demonstrate a highly unusual 'liquid' magnetic state at extremely low temperatures has been discovered by a team of Japanese and U.S. researchers, according to last week's issue of Science.*

The material, nickel gallium sulfide (NiGa2S4), was synthesized by scientists at Kyoto University. Its properties were studied by both the Japanese team and by researchers from The Johns Hopkins University (JHU) and the University of Maryland (UM) at the Commerce Department's National Institute of Standards and Technology (NIST).

The scientists studied the polycrystalline sample using both X-rays and neutrons as probes to understand its structure and properties. The neutron experiments were conducted at the NIST Center for Neutron Research.

The team found that the triangular arrangement of the material's atoms appears to prevent alignment of magnetic 'spins,' the characteristic of electrons that produces magnetism. A 'liquid' magnetic state occurs when magnetic spins fluctuate in a disorderedly, fluid-like arrangement that does not produce an overall magnetic force. The state was first proposed as theoretically possible about 30 years ago. A liquid magnetic state may be related to the similarly fluid way that electrons flow without resistance in superconducting materials.

According to Collin Broholm, a professor in the Department of Physics and Astronomy at The Johns Hopkins University in Baltimore, 'the current work shows that at an instant in time the material looks like a magnetic liquid, but whether there are fluctuations in time, as in a liquid, remains to be seen.'

Each electron can be thought of as a tiny bar magnet. The direction of its 'north' pole is its spin. 'An ordered pattern of spins generally uses less energy, says Broholm, 'but the triangular crystal structure prevents this from happening in this material.'

The team conducted their neutron experiments with an instrument called a 'disk chopper spectrometer.' The only one of its kind in North America, the instrument sends bursts of neutrons of the same wavelength through a sample. Then, more than 900 detectors arranged in a large semicircle determine exactly where and when the neutrons emerge, providing information key to mapping electron spins.

'The energy range and resolution we can achieve with this instrument is ideal for studying magnetic systems,' adds Yiming Qiu, a NIST guest researcher from UM.

The wavelength of the slowed-down (cold) neutrons available at the NIST facility—less than 1 nanometer (billionth of meter)— also allows the researchers to study nanoscale magnetic properties too small to be measured with other methods.

The project was funded by Grants-in-Aid for Scientific Research from the Japan Society for the Promotion of Science and for the 21st Century Center of Excellence ‘‘Center for Diversity and Universality in Physics’’ from MEXT of Japan, and by the Inamori Foundation. Work at The Johns Hopkins University was supported by the U.S. Department of Energy. Work at NIST was supported in part by the National Science Foundation.

As a non-regulatory agency, NIST develops and promotes measurement, standards and technology to enhance productivity, facilitate trade and improve the quality of life.