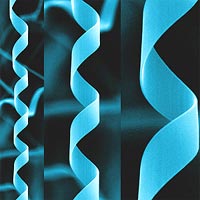 New nanohelix structures could provide engineers with a new building block for creating nanometer-scale sensors, transducers, resonators and other devices that rely on electromechanical coupling.

A previously-unknown zinc oxide nanostructure that resembles the helical configuration of DNA could provide engineers with a new building block for creating nanometer-scale sensors, transducers, resonators and other devices that rely on electromechanical coupling.

Based on a superlattice composed of alternating single-crystal “stripes” just a few nanometers wide, the “nanohelix” structure is part of a family of nanobelts – tiny ribbon-like structures with semiconducting and piezoelectric properties – that were first reported in 2001.

The nanohelices, which get their shape from twisting forces created by a small mismatch between the stripes, are produced using a vapor-solid growth process at high temperature. Information about the growth and analysis of the new structures was reported in the September 9 issue of the journal Science.

“This structure provides a new building block for nanodevices,” said Zhong Lin Wang, a Regents professor in the School of Materials Science and Engineering at the Georgia Institute of Technology. “From them we can make resonators, place molecules on their surfaces to create frequency shifts – and because they are piezoelectric, make electromechanical couplings. This adds a new structure to the toolbox of nanomaterials.”

With their superlattices composed of many near-parallel single-crystal stripes each about 3.5 nanometers wide and offset about five degrees, the nanohelices are very different from the nanosprings and nanorings of zinc oxide reported by the same research group in Science in 2004. Nanosprings are composed of a single crystal whose shape is governed by balancing the electrostatic forces created by opposite electrical charges on their edges with the elastic deformation energy of the entire structure.

The nanohelices reach lengths of up to 100 microns, with diameters from 300 to 700 nanometers and widths from 100 to 500 nanometers. The nanohelices exist in both right- and left-handed versions, with production split approximately 50-50 between the two directions.

“This is a brand new structure which shows a new growth model for nanomaterials,” Wang said. “But from the properties point of view, these are like the earlier nanobelts in having semiconducting and piezoelectric properties which makes them good for electromechanical coupling.”

However, unlike the earlier single-crystal nanosprings which are elastic, the nanohelices are rigid and retain their shape even when cut apart.

“When we first saw these structures, we were amazed by their perfection,” said Wang, who is also director of Georgia Tech’s Center for Nanoscience and Nanotechnology. “Once you form a nanohelix, it is perfectly uniform.”

The nanohelices are formed using a simple process similar to the one used for fabricating other nanobelts. However, changing the growth conditions leads to entirely different structures.

Zinc oxide (ZnO) powder is positioned inside an alumina tube in a horizontal high-temperature tube furnace. Under vacuum, the material is heated to approximately 1,000 degrees Celsius, at which point an argon carrier gas is introduced. Heating continues until the furnace reaches approximately 1,400 degrees. The nanohelix structures form on a polycrystalline aluminum oxide (Al2O3) substrate in the furnace.

Formation of a nanohelix is initiated from a single-crystal stiff nanoribbon that is dominated by polar surfaces. An abrupt structural transformation of the single-crystal nanoribbon into stripes of the superlattice-structured nanobelt leads to the formation of a uniform nanohelix due to rigid structural alteration, Wang said. The superlattice nanobelt is a periodic, coherent, epitaxial and parallel assembly of two alternating stripes of zinc oxide crystals oriented with their c-axes perpendicular to one another. Growth of the nanohelix is terminated by transforming the partially polar-surface-dominated nanobelt into a non-polar-surface-dominated single-crystal nanobelt.

The first dozen batches of nanohelices produced a yield of only about 10 percent, but Wang believes that can be improved over time. Thus far, Wang’s research team has produced nearly 20 different zinc oxide nanostructures, including nanobelts, aligned nanowires, nanotubes, nanopropellor arrays, nanobows, nanosprings, nanorings, nanobowls and others. And there may yet be other structures discovered.

“You never know what other structures might be out there that could be added to this toolbox,” he said. “From the richness of this configuration and the complete properties, this is a unique material that could become the new material for nanotechnology following carbon nanotubes.”

A wideband semiconductor, zinc oxide also has interesting piezoelectric and optical properties, can produce ultraviolet laser emissions and shows electroluminescence at room temperature. Those properties make it potentially useful in many applications.

“You can use it for spintronics, biomedical applications and many things you can make with silicon technology,” Wang said. “Zinc oxide is much cheaper and easier to work with than gallium nitride.”