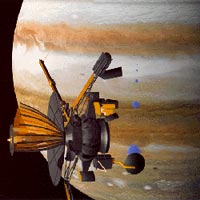 As it arrived at Jupiter on December 7, 1995, NASA's Galileo orbiter received a stream of data transmissions -- represented by the blue dots in this artist's depiction -- from the atmospheric probe that was descending through Jupiter's clouds. Image credit: NASA/JPL.

The spacecraft was put on a collision course with Jupiter's atmosphere to eliminate any chance of impact of the moon Europa, which Galileo discovered is likely to have a subsurface ocean. The team expects the spacecraft to transmit a few hours of science measurements in real time, leading up to impact on Sunday, September 21. The maneuver is necessary, since onboard propellant is nearly depleted. Without propellant, the spacecraft would not be able to point its antenna toward Earth nor adjust its flight path, so controlling the spacecraft would no longer be possible.

Launched by the Space Shuttle Atlantis in 1989, the mission produced a string of discoveries while circling Jupiter, the solar system's largest planet, 34 times. Galileo was the first spacecraft to directly measure Jupiter's atmosphere with a probe and the first to conduct long-term observations of the Jovian system from orbit.

Galileo found evidence of subsurface liquid layers of salt water on Jupiter's moons Europa, Ganymede and Callisto, and it detected extraordinary levels of volcanic activity on Io. Galileo was the first spacecraft to fly by an asteroid and the first to discover the moon of an asteroid. Galileo's prime mission ended six years ago after two years orbiting Jupiter. NASA extended the mission three times to take advantage of Galileo's unique science capabilities.

The September 21 end of mission event will be Web cast live at:
http://www.jpl.nasa.gov/webcast/galileo/

Additional information about the mission and Galileo's discoveries is available at:
http://galileo.jpl.nasa.gov