Is This Speck of Light an Exoplanet? 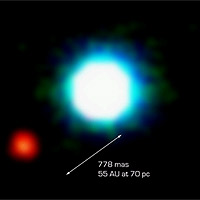 ESO PR Photo 26a/04 is a composite image of the brown dwarf object 2M1207 (centre) and the fainter object seen near it, at an angular distance of 778 milliarcsec. Designated 'Giant Planet Candidate Companion' by the discoverers, it may represent the first image of an exoplanet. Further observations, in particular of its motion in the sky relative to 2M1207 are needed to ascertain its true nature. The photo is based on three near-infrared exposures (in the H, K and L' wavebands) with the NACO adaptive-optics facility at the 8.2-m VLT Yepun telescope at the ESO Paranal Observatory.

A research paper by an international team of astronomers [2] provides sound arguments in favour, but the definitive answer is now awaiting further observations.

On several occasions during the past years, astronomical images revealed faint objects, seen near much brighter stars. Some of these have been thought to be those of orbiting exoplanets, but after further study, none of them could stand up to the real test. Some turned out to be faint stellar companions, others were entirely unrelated background stars. This one may well be different.

In April of this year, the team of European and American astronomers detected a faint and very red point of light very near (at 0.8 arcsec angular distance) a brown-dwarf object, designated 2MASSWJ1207334-393254. Also known as '2M1207', this is a 'failed star', i.e. a body too small for major nuclear fusion processes to have ignited in its interior and now producing energy by contraction. It is a member of the TW Hydrae stellar association located at a distance of about 230 light-years. The discovery was made with the adaptive-optics supported NACO facility [3] at the 8.2-m VLT Yepun telescope at the ESO Paranal Observatory (Chile).

The feeble object is more than 100 times fainter than 2M1207 and its near-infrared spectrum was obtained with great efforts in June 2004 by NACO, at the technical limit of the powerful facility. This spectrum shows the signatures of water molecules and confirms that the object must be comparatively small and light.

None of the available observations contradict that it may be an exoplanet in orbit around 2M1207. Taking into account the infrared colours and the spectral data, evolutionary model calculations point to a 5 jupiter-mass planet in orbit around 2M1207. Still, they do not yet allow a clear-cut decision about the real nature of this intriguing object. Thus, the astronomers refer to it as a 'Giant Planet Candidate Companion (GPCC)' [4].

Observations will now be made to ascertain whether the motion in the sky of GPCC is compatible with that of a planet orbiting 2M1207. This should become evident within 1-2 years at the most.