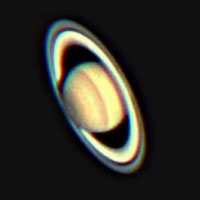 On Sept. 13th, amateur astronomer Ron Wayman of Tampa, Florida, took this picture of Saturn using his 8 inch telescope and a digital camera.

It's the brightest thing in the night sky. It's historically close to Earth. It's a wonder to behold through a telescope. It's ... Mars.

If you've been listening to the news for the past two months you've undoubtedly heard a lot about Mars. Mars. Mars. Mars. And just maybe, you're getting sick of Mars. Good news: There are eight other planets in the solar system. And this week you can see the two biggest ones.

You'll have to wake up early to do it, about 5 o'clock in the morning, but that's not much earlier than usual on a school day. Look high in the eastern sky. Saturn sits in the middle of the constellation Gemini. The planet is about three and a half times brighter than Castor and Pollux, Gemini's brightest stars, so it's easy to pick out.

When observing Saturn, a telescope is recommended. Not because Saturn is dim. It's because you'll want to see the planet's magnificent rings. They're almost twice as wide as Mars, an easy target for small telescopes.

While you're looking at Saturn's rings, consider this: they're a mystery. Astronomers aren't sure where they came from or how old they are. Some evidence suggests they formed only a few hundred million years ago--a time when dinosaurs roamed the Earth. Before then Saturn might have been a ring-less planet. You can find out more by reading Science@NASA's "The Real Lord of the Rings."

Next, look for Jupiter.

From Saturn, trace an imaginary line down toward the horizon. That leads you to Jupiter--a bright "star" shining through the rosy glow of sunrise. Jupiter has spent the past two months hiding behind the sun, but now it's emerging from the glare.

Jupiter is five times brighter than Saturn--really eye-catching. Jupiter's cloud belts are easy to see through a telescope, as are its four largest moons: Io, Europa, Ganymede and Callisto. Together they look like a miniature solar system.

Jupiter will be in the news this week because NASA plans to crash a spacecraft into the planet on Sept. 21st. The Galileo probe has been orbiting and studying Jupiter since December 1995. The craft has had some amazing adventures--dipping into volcanic plumes on Io, flying through Jupiter's dark rings and radiation belts. But now its thrusters are nearly exhausted, and while ground controllers still have some control they're going to send Galileo plunging into Jupiter where it will burn up like a meteor.

The move is designed to protect possible life on Jupiter's moon Europa from terrestrial contamination. If Galileo is reduced to atoms in Jupiter's atmosphere, it will never accidentally crash-land on Europa. No one on Earth will be able to see the impact, but it's something to think about while you're watching the giant planet this week.

If you don't feel like waking up at 5 a.m. to see Saturn and Jupiter, there's always Mars. It really is bright and wonderful--a joy to behold through a telescope. And you can behold it before bedtime. Convenient.

Just remember... it's not the only planet in the solar system.