Massive Merger Of Galaxies Is The Most Powerful On Record 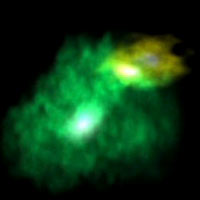 Cosmic Head On Collision - This image details what the scientists are calling the perfect cosmic storm: galaxy clusters that collided like two high-pressure weather fronts and created hurricane-like conditions, tossing galaxies far from their paths and churning shock waves of 100-million-degree gas through intergalactic space.

An international team of scientists, led by a NASA-funded researcher, announced today, they observed a nearby head-on collision of two galaxy clusters. The clusters smashed together thousands of galaxies and trillions of stars. It is one of the most powerful events ever witnessed. Such collisions are second only to the Big Bang in total energy output.

The event was captured with the European Space Agency's XMM-Newton observatory. Scientists are calling the event the perfect cosmic storm: galaxy clusters that collided like two high-pressure weather fronts and created hurricane-like conditions, tossing galaxies far from their paths and churning shock waves of 100-million-degree gas through intergalactic space. Data from the observations were released today.

This unprecedented view of merger in action crystallizes the theory the universe built its magnificent hierarchal structure from the "bottom up," essentially through mergers of smaller galaxies and galaxy clusters into bigger ones.

"Here before our eyes we see the making of one of the biggest objects in the universe," said team leader Dr. Patrick Henry of the University of Hawaii. "What was once two distinct but smaller galaxy clusters 300 million years ago is now one massive cluster in turmoil. The AOL takeover of Time-Warner was peanuts compared to this merger," he added.

Henry and colleagues, Drs. Alexis Finoguenov and Ulrich Briel of the Max-Planck Institute for Extraterrestrial Physics, Germany, present these results in an upcoming issue of the Astrophysical Journal. The forecast for the new super-cluster is "clear and calm," they said, now the worst of the storm has passed.

Galaxy clusters are the largest gravitationally bound structures in the universe, containing hundreds to thousands of galaxies. Our Milky Way galaxy is part of a small group moving toward the Virgo Cluster. We are destined for a collision in a few billion years.

The cluster in today's announcement, Abell 754 in the constellation Hydra, has been known for decades. However, the new observation reveals the merger may have occurred from the opposite direction than was previously thought. The researchers found evidence for this by tracing the wreckage left in the merger's wake spanning a distance of millions of light years. While other large mergers are known, none have been measured in such detail.

For the first time, scientists created a complete "weather map" of Abell 754 and can determine a forecast. The map contains information about the temperature, pressure and density of the new cluster. As in all clusters, most of the ordinary matter is in the form of gas between the galaxies. It is not locked up in the galaxies or stars themselves. The massive forces of the merging clusters accelerated intergalactic gas to great speeds. This resulted in shock waves that heated the gas to very high temperatures, which radiated X-ray light, far more energetic than the visible light our eyes can detect.

The dynamics of the merger revealed by XMM-Newton point to a cluster in transition. "One cluster has apparently smashed into the other from the 'northwest' and has since made one pass through," Finoguenov said. "Now, gravity will pull the remnants of this first cluster back towards the core of the second. Over the next few billion years, the remnants of the clusters will settle and the merger will be complete," he added.

The observation shows the largest structures in the universe are still forming. Abell 754 is relatively close to Earth, about 800 million light years away. The construction boom may be over in a few more billion years, though. A mysterious dark energy appears to be accelerating the universe's expansion rate. This means objects are flying apart from each other at ever-increasing speeds, and clusters may eventually never have the opportunity to collide with each other.

X-ray observations of galaxy clusters such as Abell 754 will help better define dark energy and also dark matter, an "invisible" form of matter that appears to comprise over 80 percent of a galaxy cluster's mass.