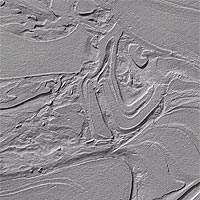 Thousands of newly released portraits of martian landscapes from NASA's Mars Global Surveyor spacecraft testify to the diversity of ways geological processes have sculpted the surface of our neighboring planet.

Swirling textures that some scientists call "taffy-pull terrain” fill one new image from the plains of southern Mars, for example. Other images reveal details of features such as wind-whipped polar dunes and steep-sided valleys carved by flowing water or lava.

The 10,232 newly released pictures from the Mars Orbiter Camera on Mars Global Surveyor bring the total number of images in the camera's online gallery to more than 134,000. The new batch is at: http://www.msss.com/mars_images/moc/2003/09/30/.

The new group of images was taken between August 2002 and February 2003, then validated and archived by the camera team. It includes many views of north polar terrain, extremely clear-atmosphere views of a deep southern basin named Hellas Planitia, and a variety of martian landforms between the north pole and the southern middle latitudes. The pictures show martian surface details down to the size of a large sport utility vehicle.

Since Mars Global Surveyor began orbiting Mars six years ago, the mission has provided a wealth of information about the planet's atmosphere and interior, as well at its surface.

In addition to semi-annual releases of large collections of archived pictures, the Mars Orbiter Camera team posts a new image daily and recently began soliciting public suggestions for camera targets on Mars. The full gallery is available at: http://www.msss.com/moc_gallery/.