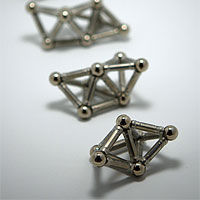 The magnetic 'stick and ball' construction toys first used to understand entropy, or all the possible cluster structures that could be formed from a given number of particles.

Scientists have long studied how atoms and molecules structure themselves into intricate clusters. Unlocking the design secrets of nature offers lessons in engineering artificial systems that could self-assemble into desired forms.

In the Jan. 29 issue of Science, a team from Harvard led by Vinothan Manoharan and Michael Brenner presents additional clues to how and why groups of atoms and molecules may favor less symmetrical and more complex, flexible geometric patterns.

The answer relates to a familiar concept in physics called entropy, the ways in which particles are able to arrange themselves. The researchers first caught sight of the link by using magnetic “stick and ball” construction toys that can make varying shapes.

Manoharan, associate professor of chemical engineering and physics in Harvard’s School of Engineering and Applied Sciences (SEAS) and the Department of Physics, and his colleagues used colloidal particles, a suspended chemical mixture seen in semi-solid foods such as mayonnaise, to simulate the clustering behavior of atoms and molecules.

“To allow clusters to form, we put a few tiny polystyrene spheres in microscopic cylindrical wells filled with water. The particles act as ’sticky’ hard spheres and naturally cluster together just like groups of nearby interacting atoms and molecules do,” said Manoharan.

The researchers expected that simple, highly symmetric shapes would arise most often. Instead, two surprising, related, and scalable phenomena arose when the number of particles used in their experiments reached six or rose above nine.

Six particles can form into a symmetrical octahedron and into a more complex tri-tetrahedron shape. In terms of chemical structure, each shape results in 12 bonds, and hence, has the same amount of potential energy. With the potential energy being equal, Manoharan and colleagues thought that both shapes would occur in equal proportion. They found, however, that the tri-tetrahedron occurs 20 times more often than the octahedron.

“The only possible explanation was entropy,” said Manoharan. “Most people are familiar with entropy as a measure of ‘disorder,’ but the most useful definition of entropy is simply the number of different ways a bunch of particles can arrange themselves.”

Natalie Arkus, a former applied mathematics graduate student who worked with Brenner, the Glover Professor of Applied Mathematics and Applied Physics, provided a hint to solving the puzzle, as she discovered a method to calculate all the possible structures that could be formed using geometric magnetic toys made up of magnetic metal rods and silver ball bearings.

Since there are more ways for the complicated tri-tetrahedron structure to form (something that can be seen by labeling the toy spheres and counting the ways they can be put together), the shape appears far more frequently than the octahedron. In general, among clusters with the same potential energy, highly symmetric structures are less likely to arise.

The researchers also found that when the number of particles reaches nine or higher, entropy plays another important role.

Because the number of possible structures with nine or more particles is vast, the team focused on what are called nonrigid, or flexible, structures. Nonrigidity occurs when a cluster is half octahedral and shares at least one vertex, allowing the cluster to twist without breaking or forming another bond (something also easily seen by using the toys).

“Because they can move flexibly, the nonrigid clusters have high vibrational entropy,” explained Manoharan. “In cases with nine or more particles, symmetric clusters do not appear as often due to rotational entropy. The ability to rotate is useful, as it allows clusters to have extra bonds.”

As a general rule, the team found that for all clusters up to eight particles and a select number of structures with up to 12, the most symmetric structures occurred the least often due to entropy.

“Our findings illustrate, in a tangible way, what the concept of entropy means,” said Manohran.

Looking ahead, the researchers are interested in using their results to understand the emergence of bulk crystallization, or how particles come together in the early stages of forming a crystal.

Manoharan and Brenner’s co-authors included Guangnan Meng, a research associate in the Department of Physics at Harvard University, and Natalie Arkus, a graduate of SEAS and now a postdoctoral fellow at the Rockefeller University. The authors acknowledge support from the