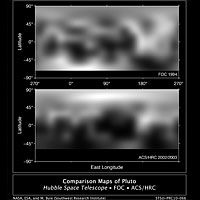 The top picture was taken in 1994 by the European Space Agency's Faint Object Camera. The bottom image was taken in 2002-2003 by the Advanced Camera for Surveys. The dark band at the bottom of each map is the region that was hidden from view at the time the data were taken.

NASA released the most detailed set of images ever taken of the distant dwarf planet Pluto. The images taken by NASA's Hubble Space Telescope show an icy and dark molasses-colored, mottled world that is undergoing seasonal changes in its surface color and brightness. Pluto has become significantly redder, while its illuminated northern hemisphere is getting brighter. These changes are most likely consequences of surface ices sublimating on the sunlit pole and then refreezing on the other pole as the dwarf planet heads into the next phase of its 248-year-long seasonal cycle. The dramatic change in color apparently took place in a two-year period, from 2000 to 2002.

The Hubble images will remain our sharpest view of Pluto until NASA's New Horizons probe is within six months of its Pluto flyby. The Hubble pictures are proving invaluable for picking out the planet's most interesting-looking hemisphere for the New Horizons spacecraft to swoop over when it flies by Pluto in 2015.

Though Pluto is arguably one of the public's favorite planetary objects, it is also the hardest of which to get a detailed portrait because the world is small and very far away. Hubble resolves surface variations a few hundred miles across, which are too coarse for understanding surface geology. But in terms of surface color and brightness Hubble reveals a complex-looking and variegated world with white, dark-orange and charcoal-black terrain. The overall color is believed to be a result of ultraviolet radiation from the distant sun breaking up methane that is present on Pluto's surface, leaving behind a dark and red carbon-rich residue.

When Hubble pictures taken in 1994 are compared with a new set of images taken in 2002 to 2003, astronomers see evidence that the northern polar region has gotten brighter, while the southern hemisphere has gotten darker. These changes hint at very complex processes affecting the visible surface, and the new data will be used in continued research.

The images are allowing planetary astronomers to better interpret more than three decades of Pluto observations from other telescopes, says principal investigator Marc Buie of the Southwest Research Institute in Boulder, Colo. 'The Hubble observations are the key to tying together these other diverse constraints on Pluto and showing how it all makes sense by providing a context based on weather and seasonal changes, which opens other new lines of investigation.'

The Hubble pictures underscore that Pluto is not simply a ball of ice and rock but a dynamic world that undergoes dramatic atmospheric changes. These are driven by seasonal changes that are as much propelled by the planet's 248-year elliptical orbit as its axial tilt, unlike Earth where the tilt alone drives seasons. The seasons are very asymmetric because of Pluto's elliptical orbit. Spring transitions to polar summer quickly in the northern hemisphere because Pluto is moving faster along its orbit when it is closer to the sun.

Ground-based observations, taken in 1988 and 2002, show that the mass of the atmosphere doubled over that time. This may be due to warming and sublimating nitrogen ice. The new Hubble images from 2002 to 2003 are giving astronomers essential clues about how the seasons on Pluto work and about the fate of its atmosphere.

The images, taken by the Advanced Camera for Surveys, are invaluable to planning the details of the New Horizons flyby in 2015. New Horizons will pass by Pluto so quickly that only one hemisphere will be photographed in the highest possible detail. Particularly noticeable in the Hubble image is a bright spot that has been independently noted to be unusually rich in carbon monoxide frost. It is a prime target for New Horizons. 'Everybody is puzzled by this feature,' says Buie. New Horizons will get an excellent look at the boundary between this bright feature and a nearby region covered in pitch-black surface material.

'The Hubble images will also help New Horizons scientists better calculate the exposure time for each Pluto snapshot, which is important for taking the most detailed pictures possible,' says Buie. With no chance for re-exposures, accurate models for the surface of Pluto are essential in preventing pictures that are either under- or overexposed.

The Hubble images are a few pixels wide. But through a technique called dithering, multiple, slightly offset pictures can be combined through computer-image processing to synthesize a higher-resolution view than could be seen in a single exposure. 'This has taken four years and 20 computers operating continuously and simultaneously to accomplish,' says Buie, who developed special algorithms to sharpen the Hubble data.

Buie plans to use Hubble's new Wide Field Camera 3 to make further Pluto observations prior to the arrival of New Horizons.

The Hubble Space Telescope is a project of international cooperation between NASA and the European Space Agency. NASA's Goddard Space Flight Center manages the telescope. The Space Telescope Science Institute conducts Hubble science operations. The institute is operated for NASA by the Association of Universities for Research in Astronomy, Inc. in Washington, D.C.

News Story Origin and Copyright: NASA
Click here for the original news release.
'We are all in the gutter, but some of us are looking at the stars.'