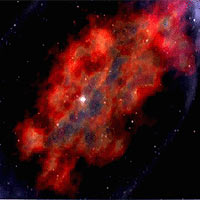 Three powerful blasts from three wholly different regions in space have left scientists scrambling. The blasts, which lasted only a few seconds, might be early alert systems for star explosions called supernovae, which could start appearing any day now.

The first two blasts, called X-ray flashes, occurred on September 12 and 16. These were followed by a more powerful burst on September 24 that seems to be on the cusp between an X-ray flash and a full-fledged gamma-ray burst, a discovery interesting in its own right. If these signals lead to supernovae, as expected, scientists would have a tool to predict star explosions and then watch them go off from start to finish.

A team led by Dr. George Ricker of the Massachusetts Institute of Technology detected the explosions with NASA's High-Energy Transient Explorer (HETE-2). Science teams around the world using space- and ground-based observatories have joined in, torn and conflicted over which burst region to track most closely.

'Each burst has been beautiful,' said Ricker. 'Depending on how these evolve, they could support important theories about supernovae and gamma-ray bursts. These past two weeks have been like 'cock, fire, reload.' Nature keeps on delivering, and our HETE-2 satellite keeps on responding flawlessly.'

Gamma-ray bursts are the most powerful explosions known other than the Big Bang. Many appear to be caused by the death of a massive star collapsing into a black hole. Others might be from merging black holes or neutron stars. In either case, the event likely produces twin, narrow jets in opposite directions, which carry off tremendous amounts of energy. If one of jets points to Earth, we see this energy as a 'gamma-ray' burst.

The lower-energy X-ray flashes might be gamma-ray bursts viewed slightly off angle from the jet direction, somewhat similar to how a flashlight is less blinding when viewed at an angle. The majority of light particles from X-ray flashes, called photons, are X rays -- energetic, but not quite as powerful as gamma rays. Both types of bursts last only a few milliseconds to about a minute. HETE-2 detects the bursts, studies their properties, and provides a location so that other observatories can study the burst afterglow in detail.

The trio of bursts from the past few weeks has the potential of settling two long-standing debates. Some scientists say that X-ray flashes are different beasts all together, not related to gamma-ray bursts and massive star explosions. Detecting a supernova in the region where the X-ray flash appeared would refute that belief, instead confirming the connection between the two. Follow-up observations of the September 24 burst, named GRB040924 for the date it was observed, are already solidifying the theory of a cosmic explosion continuum from X-ray flashes up through gamma-ray bursts.

'Last year the discovery of GRB030329 by HETE-2 sealed the connection between gamma-ray bursts and massive supernovae,' said Prof. Stanford Woosley of the University of California at Santa Cruz, who has championed several theories concerning the physics of star explosions. 'These two September bursts may be the first time we see an X-ray flash lead to a supernova. We might know very soon.'

In addition to all of this, GRB040924 goes on record as generating the fastest response ever for a gamma-ray burst satellite. HETE-2 detected the burst and relayed information through the NASA-operated Gamma-ray Burst Coordinates Network in under 14 seconds, which led to an optical detection about 15 minutes later with the Palomar 60-inch telescope, just north of San Diego. Dr. Derek Fox of Caltech was the lead on this observation.

'We all expect much more of this type of exciting science to come after the launch of Swift,' said Dr. Anne Kinney, director of NASA's Universe Division. Swift, to launch in October, contains three telescopes (gamma ray, X ray and UV/optical) for quick burst detection, swift relay of information, and immediate follow-up observations of the afterglow.

HETE was built by MIT as a mission of opportunity under the NASA Explorer Program, collaboration among U.S. universities, Los Alamos National Laboratory, and scientists and organizations in Brazil, France, India, Italy and Japan.

Additional information about the physics of star explosions:

While many scientists say that X-ray flashes are gamma-ray bursts viewed slightly off angle, another theory is that the star explosion that causes the X-ray flash is rich in baryons (a family of particles that includes protons and neutrons), as opposed to leptons (particles that include electrons). A baryon-dominated blast would produce more X rays, and a lepton-dominated blast would produce more gamma rays. This is because the baryons move more slowly than leptons; and slower moving matter would make a softer (lower-energy) burst at all angles.

According to Dr. Stanford Woosley, the supernova / gamma-ray burst connection is this: When a massive star runs out of nuclear fuel, its core will collapse, yet without the star's outer part knowing. A black hole forms inside surrounded by a disk of accreting matter, and, within a few seconds, this launches a jet of matter away from the black hole that ultimately makes the gamma-ray burst. The jet pierces the outer shell of the star about nine seconds after its creation. The jet of matter, in conjunction with vigorous winds of newly forged radioactive nickel-56 blowing off the disk inside, shatters the star within seconds. This shattering represents the supernova event, and the amount of radioactive nickel-56 gives its brightness. However, from our vantage point, we will not see the supernova until about two weeks after the gamma-ray burst because the region is enshrouded by gas and dust, blocking light. 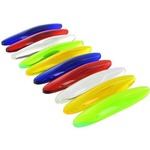