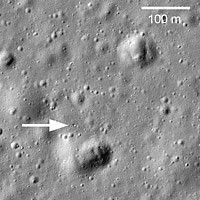 (Rover Parking Spot): The Lunokhod 1 rover in its final parking spot on the moon.

A team of physicists led by a professor at UC San Diego has pinpointed the location of a long lost light reflector left on the lunar surface by the Soviet Union nearly 40 years ago that many scientists had unsuccessfully searched for and never expected would be found.

The French-built laser reflector was sent aboard the unmanned Luna 17 mission, which landed on the moon November 17, 1970, releasing a robotic rover that roamed the lunar surface and carried the missing laser reflector. The Soviet lander and its rover, called Lunokhod 1, were last heard from on September 14, 1971.

“No one had seen the reflector since 1971,” said Tom Murphy, an associate professor of physics at UCSD. He heads a team of scientists engaged in a long-term effort to look for deviations of Einstein’s theory of general relativity by measuring the shape of the lunar orbit to within an accuracy of one millimeter, or about the thickness of a paperclip. This is accomplished by timing the reflections of pulses of laser light from reflectors left on the moon by Apollo astronauts and turning the timing measurement into a distance.

“We routinely use the three hardy reflectors placed on the moon by the Apollo 11, 14 and 15 missions,” said Murphy, “and occasionally the Soviet-landed Lunokhod 2 reflector—though it does not work well enough to use when illuminated by sunlight. But we yearned to find Lunokhod 1.”

“Lunokhod 1, by virtue of its location, would provide the best leverage for understanding the liquid lunar core, and for producing an accurate estimate of the position of the center of the moon—which is of paramount importance in mapping out the orbit and putting Einstein’s gravity to a test,” said Murphy.

Murphy said his team had occasionally looked for the Lunokhod 1 reflector over the last two years, but faced tall odds against finding it until recently. The breakthrough came last month when the high-resolution camera on NASA’s Lunar Reconnaissance Orbiter, or LRO, obtained images of the landing site. The camera team, led by Mark Robinson at Arizona State University, identified the rover as a sunlit speck on the image—miles from where Murphy and his team had been searching. (see: http://www.nasa.gov/mission_pages/LRO/multimedia/lroimages/lroc-20100318.html ) But until now the existence of the reflector or its precise location was unknown.

“It turns out we were searching around a position miles from the rover,” said Murphy. “We could only search one football-field-sized region at a time. The recent images from LRO, together with laser altimetry of the surface, provided coordinates within 100 meters, and then we were in business and only had to wait for time on the telescope in good observing conditions.”

On April 22, his team sent pulses of laser light from the 3.5 meter telescope at the Apache Point Observatory in New Mexico, zeroing in on the target coordinates provided by the LRO images. Murphy, together with Russet McMillan of the Apache Point Observatory in Sunspot, NM, and UCSD physics graduate student Eric Michelsen found the long lost Lunokhod 1 reflector and pinpointed its distance from earth to within one centimeter. They then made a second observation less than 30 minutes later that allowed the team to triangulate the reflector’s latitude and longitude on the moon, in other words its exact spot on the moon, to within 10 meters—“not bad for a half-hour’s work,” said Murphy. In the coming months, he estimates it will be possible to establish the reflector’s coordinates to better than one-centimeter precision.

The return signal from the reflector was measured by Murphy’s team as a collection of individual particles, or photons, of laser light.

“We quickly verified the signal to be real and found it to be surprisingly bright: at least five times brighter than the other Soviet reflector, on the Lunokhod 2 rover, to which we routinely send laser pulses,” Murphy said. “The best signal we’ve seen from Lunokhod 2 in several years of effort is 750 return photons, but we got about 2,000 photons from Lunokhod 1 on our first try. It’s got a lot to say after almost 40 years of silence.”

The discovery of the Soviet reflector came as a surprise, because scientists had actively searched for it for nearly four decades without success. Many scientists had speculated that the Lunokhod 1 rover might have fallen into a crater or parked badly, with its reflector not facing the earth, which would have prevented it from being located by laser pulses.

“Not only now do we know that Lunokhod 1 is there, we also know that it is parked perfectly so that its reflector faces earth,” said Murphy. “In fact, the signal is so surprisingly strong that the rover could not be in anything but a level parking spot with its last commanded roll on the lunar surface deliberately oriented toward the earth.”

“Near full moon, the strength of the returning light decreases by a factor of ten,” he adds. “We need to understand what is causing this if we are contemplating putting additional scientific equipment on the moon. Finding the Lunokhod 1 reflector will add important clues to this study.”