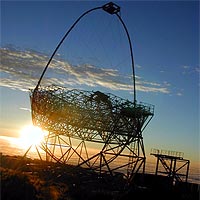 On October 10th the Magic Telescope (Major Atmospheric Gamma Imaging Cherenkov telescope) will be inaugurated. The telescope is located La Palma island, 2200 meters above the sea level at the Observatory Roque de los Muchachos, of the Itituto Astrofisico de Canarias. With his 17-meter-diameter-mirror and 240 square meters surface, it’s the largest telescope in the world dedicated to ‘gamma astronomy’, that is devoted to the detection of gamma rays.

Magic is the result of an international collaboration to which Italy has given a fundamental contribution through the researchers of the Italian National Institute of Nuclear Physics (Infn), belonging to the sections the universities of Padova, Siena and Udine. The research groups of the three universities have been lead respectively by Mosè Mariotti, Riccardo Paoletti and Alessandro De Angelis and coordinated at international level by Luigi Peruzzo, former director of the Department of Physics at University of Padova.

The gamma ray are particles with an energy over a million times larger than the energy of visible light. In particular, gamma rays with very hight energy are emitted for a few seconds in sudden and largely misterious explosions called Gamma Ray Bursts, and by other sources like the Active Galactic Nuclei (Agn). The gamma rays that arrive to us after being produced inside these sources at very high energies, give us direct and precious information on the processes that produced them.

"The gamma rays are not easy to observe. Contrarily to visible light in fact they cannot be reflected on surfaces or become concentrated with optic systems on detectors. They behave more likely as energetic bullets and their detection must be done with the tools and the methods of the subnuclear physics, developed in the big international laboratories. Moreover, since the gamma rays cannot cross the atmosphere, it is necessary to put the detectors either outside the atmosphere itself (on board of satellites, given the current cost of space technologies, the instruments must have small dimensions and hence small effective areas) or build ground based detectors like Magic, able to detect the so called Cherenkov light", explains Luigi Peruzzo. The Cherenkov light is emitted by the shower of charged particles produced by the gamma rays that interact with the atmophere. In orther words, this radiation is a sort of flash that is produced when a charged particle passes through a medium at a ‘superluminal’ speed, i.e. faster than the speed of light in that medium. Of course nothing goes faster than light in the vacuum but, in a medium like the atmosphere, the light propagates slower than in the vacuum and, sometimes, slower than very energetic particles like electrons and positrons produced in cascade by gamma rays. Magic is not therefore comparable to an optical telescope for astronomy, but it’s a huge particle detector. The big reflecting surface focuses the weak flash of Cherenkov light and the gamma ray is ‘photographed’ as if it were a shooting star whose flash lasts only 2-3 nanoseconds (billionths of seconds).

Magic will allow the study of gamma radiation coming from galactic and extragalactic sources. It will be possible to obtain decisive information on either the physics of pulsars (where the extreme conditions of gravity and high energies supply a natural laboratory in order to verify models and physics laws), or the origin of cosmic rays. Among the measures of experimental cosmology that the Magic telescope can do, the most important is the study of gamma ray source spectrum with the aim to observe the Universe at a depht that can go up to 8 billions light-years. This study allows to introduce an alternative method of measuring distances, which, with the traditional methods, allows to measure some cosmological quantities like the dark energy, that seems to be the most abundant constituent in our Universe. Furthermore, the technological solutions adopted by Magic will allow it to operate also at low threshold in energy for the research of new particles like the WIMPs (Weakly Interacting Massive Particles), possible wrecks of Universe’s evolution that researchers assume to be dark matter’s principal constituent. The discovery of such particles would have a double valency: from one side the mistery of dark matter would be solved, and from the other side revealing the nature, putting credit in or denying the recent theories on particle supersimmetry non yet verified in the experiments at the accelerators.

"The Magic telescope will be used also as a test stand in order to produce innovative systems of data acquisition. The utility of data acquisition is extended also outside the research in physics, toward interdisciplinary fields and more strictly technological. In particular the systems of data acquisition produced by Magic will contribute to the solution of problems in ‘recognizing images’ that accomunates the topics of Cherenkov telescopes to the detectors in general and on satellites (like the satellite Glast, next to launch) and to medical physics", concludes Luigi Peruzzo.