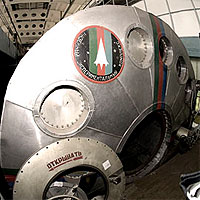 In order to investigate the human factors of such a mission, ESA has teamed up with the Russian Institute of Biomedical Problems (IBMP) and will send a joint crew of six on a 520-day simulated mission to Mars.

The simulation follows the mission profile of a real Mars mission, including an exploration phase on the surface of Mars. Nutrition will be identical to that provided on board the International Space Station.

The simulations will take place here on Earth inside a special facility in Moscow. A precursor 105-day study is scheduled to early 2009, possibly followed by another 105-day study, before the full 520-day study begins late 2009.

The crew will have to take care of themselves for almost two years during the roundtrip. Their survival is in their own hands, relying on the work of thousands of engineers and scientists back on Earth, who made such a mission possible.

They will experience extreme isolation and confinement. They will lose sight of planet Earth. A radio contact will take 40 minutes to travel to us and then back to the space explorers.

A human mission to Mars is a bold vision for the time beyond the International Space Station. However, preparations have already started today. They are geared and committed to one goal: to send humans on an exploration mission to Mars, individuals who will live and work together in a spaceship for over 500 days.

Starting in 2010, an international crew of six will simulate a 520-day round-trip to Mars, including a 30-day stay on the martian surface. In reality, they will live and work in a sealed facility in Moscow, Russia, to investigate the psychological and medical aspects of a long-duration space mission. ESA is looking for European volunteers to take part.

The ‘mission’ is part of the Mars500 programme being conducted by ESA and Russia’s Institute of Biomedical Problems (IBMP) to study human psychological, medical and physical capabilities and limitations in space through fundamental and operational research. ESA’s Directorate of Human Spaceflight is undertaking Mars500 as part of its European Programme for Life and Physical Sciences (ELIPS) to prepare for future human missions to the Moon and Mars.

Following on from the successful 105-day precursor study completed in July, ESA is now looking for two candidates and two backups for the full 520-day study, which is due to get underway before mid-2010 after four months of training.

Candidates should be aged 20–50, motivated, in good health and no taller than 185 cm. They should speak one of the working languages: English and Russian. Candidates must have a background and work experience in medicine, biology, life support systems engineering, computer engineering, electronic engineering or mechanical engineering.

Selection will be based on education, professional experience, medical fitness and social habits. Following an initial assessment, potential candidates will have to submit results from medical tests and will then be invited for interview, to be screened in a process similar to that used in astronaut selection.

The Call for Candidates and related documents are available on: http://www.esa.int/callmars500. Completed and signed application forms should be sent to Mars500@esa.int. The deadline for applications is 5 November 2009.