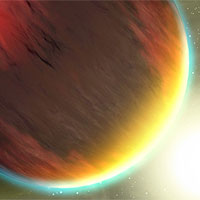 The basic chemistry for life has been detected in a second hot gas planet, HD 209458b, depicted in this artist's concept.

Peering far beyond our solar system, NASA researchers have detected the basic chemistry for life in a second hot gas planet, advancing astronomers toward the goal of being able to characterize planets where life could exist. The planet is not habitable but it has the same chemistry that, if found around a rocky planet in the future, could indicate the presence of life.

'It's the second planet outside our solar system in which water, methane and carbon dioxide have been found, which are potentially important for biological processes in habitable planets,' said researcher Mark Swain of NASA's Jet Propulsion Laboratory, Pasadena, Calif. 'Detecting organic compounds in two exoplanets now raises the possibility that it will become commonplace to find planets with molecules that may be tied to life.'

Swain and his co-investigators used data from two of NASA's orbiting Great Observatories, the Hubble Space Telescope and Spitzer Space Telescope, to study HD 209458b, a hot, gaseous giant planet bigger than Jupiter that orbits a sun-like star about 150 light years away in the constellation Pegasus. The new finding follows their breakthrough discovery in December 2008 of carbon dioxide around another hot, Jupiter-size planet, HD 189733b. Earlier Hubble and Spitzer observations of that planet had also revealed water vapor and methane.

The detections were made through spectroscopy, which splits light into its components to reveal the distinctive spectral signatures of different chemicals. Data from Hubble's near-infrared camera and multi-object spectrometer revealed the presence of the molecules, and data from Spitzer's photometer and infrared spectrometer measured their amounts.

'This demonstrates that we can detect the molecules that matter for life processes,' said Swain. Astronomers can now begin comparing the two planetary atmospheres for differences and similarities. For example, the relative amounts of water and carbon dioxide in the two planets is similar, but HD 209458b shows a greater abundance of methane than HD 189733b. 'The high methane abundance is telling us something,' said Swain. 'It could mean there was something special about the formation of this planet.'

Other large, hot Jupiter-type planets can be characterized and compared using existing instruments, Swain said. This work will lay the groundwork for the type of analysis astronomers eventually will need to perform in shortlisting any promising rocky Earth-like planets where the signatures of organic chemicals might indicate the presence of life.

Rocky worlds are expected to be found by NASA's Kepler mission, which launched earlier this year, but astronomers believe we are a decade or so away from being able to detect any chemical signs of life on such a body.

If and when such Earth-like planets are found in the future, 'the detection of organic compounds will not necessarily mean there's life on a planet, because there are other ways to generate such molecules,' Swain said. 'If we detect organic chemicals on a rocky, Earth-like planet, we will want to understand enough about the planet to rule out non-life processes that could have led to those chemicals being there.'

'These objects are too far away to send probes to, so the only way we're ever going to learn anything about them is to point telescopes at them. Spectroscopy provides a powerful tool to determine their chemistry and dynamics.'

You can follow the history of planet hunting from science fiction to science fact with NASA's PlanetQuest Historic Timeline at http://planetquest.jpl.nasa.gov/timeline/ .

This interactive web feature, developed by JPL, conveys the story of exoplanet exploration through a rich tapestry of words and images spanning thousands of years, beginning with the musings of ancient philosophers and continuing through the current era of space-based observations by NASA's Spitzer and Kepler missions. The timeline highlights milestones in culture, technology and science, and includes a planet counter that tracks the pace of exoplanet discoveries over time.

More information about exoplanets and NASA's planet-finding program is at http://planetquest.jpl.nasa.gov .

The Hubble Space Telescope is a project of international cooperation between NASA and the European Space Agency and is managed by NASA's Goddard Space Flight Center in Greenbelt, Md. The Space Telescope Science Institute, Baltimore, Md., conducts Hubble science operations. The institute is operated for NASA by the Association of Universities for research in Astronomy, Inc., Washington, D.C.

JPL manages the Spitzer Space Telescope mission for NASA. Science operations are conducted at the Spitzer Science Center at the California Institute of Technology in Pasadena. Caltech manages JPL for NASA.