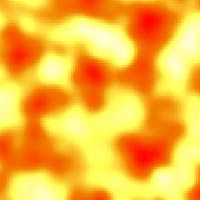 Cosmologists from the California Institute of Technology have used observations probing back to the remote epoch of the universe when atoms were first forming to detect movements among the seeds that gave rise to clusters of galaxies. The new results show the motion of primordial matter on its way to forming galaxy clusters and superclusters. The observations were obtained with an instrument high in the Chilean Andes known as the Cosmic Background Imager (CBI), and they provide new confidence in the accuracy of the standard model of the early universe in which rapid inflation occurred a brief instant after the Big Bang.

The novel feature of these polarization observations is that they reveal directly the seeds of galaxy clusters and their motions as they proceeded to form the first clusters of galaxies.

Reporting in the October 7 online edition of Science Express, Caltech's Rawn Professor of Astronomy, and principal investigator on the CBI project, Anthony Readhead and his team say the new polarization results provide strong support for the standard model of the universe as a place in which dark matter and dark energy are much more prevalent than everyday matter as we know it, which poses a major problem for physics. A companion paper describing early polarization observations with the CBI has been submitted to the Astrophysical Journal.

The cosmic background observed by the CBI originates from the era just 400,000 years after the Big Bang and provides a wealth of information on the nature of the universe. At this remote epoch none of the familiar structures of the universe existed--there were no galaxies, stars, or planets. Instead there were only tiny density fluctuations, and these were the seeds out of which galaxies and stars formed under the hand of gravity.

Instruments prior to the CBI had detected fluctuations on large angular scales, corresponding to masses much larger than superclusters of galaxies. The high resolution of the CBI allowed the seeds of the structures we observe around us in the universe today to be observed for the first time in January 2000.

The expanding universe cooled and by 400,000 years after the Big Bang it was cool enough for electrons and protons to combine to form atoms. Prior to this time photons could not travel far before colliding with an electron, and the universe was like a dense fog, but at this point the universe became transparent and since that time the photons have streamed freely across the universe to reach our telescopes today, 13.8 billion years later. Thus observations of the microwave background provide a snapshot of the universe as it was just 400,000 years after the Big Bang--long before the formation of the first galaxies, stars, and planets.

The new data were collected by the CBI between September 2002 and May 2004, and cover four patches of sky, encompassing a total area three hundred times the size of the moon and showing fine details only a fraction of the size of the moon. The new results are based on a property of light called polarization. This is a property that can be demonstrated easily with a pair of polarizing sunglasses. If one looks at light reflected off a pond through such sunglasses and then rotates the sunglasses, one sees the reflected light varying in brightness. This is because the reflected light is polarized, and the polarizing sunglasses only transmit light whose polarization is properly aligned with the glasses. The CBI likewise picks out the polarized light, and it is the details of this light that reveal the motion of the seeds of galaxy clusters.

The first detection of polarized emission by the Degree Angular Scale Interferometer (DASI), the sister project of the CBI, in 2002 provided dramatic evidence of motion in the early universe, as did the measurements by the Wilkinson Microwave Anisotropy Probe (WMAP) in 2003. The CBI results announced today significantly augment these earlier findings by demonstrating directly, and on the small scales corresponding to galaxy clusters, that the polarized emission is out of step with the total intensity.

Other data on the cosmic microwave background polarization were released just two weeks ago by the DASI team, whose three years of results show further compelling evidence that the polarization is indeed due to the cosmic background and is not contaminated by radiation from the Milky Way. The results of these two sister projects therefore complement each other beautifully, as was the intention of Readhead and John Carlstrom, the principal investigator of DASI and a coauthor on the CBI paper, when they planned these two instruments a decade ago.

According to Readhead, 'Physics has no satisfactory explanation for the dark energy which dominates the universe. This problem presents the most serious challenge to fundamental physics since the quantum and relativistic revolutions of a century ago. The successes of these polarization experiments give confidence in our ability to probe fine details of the polarized cosmic background, which will eventually throw light on the nature of this dark energy.'

'The success of these polarization experiments has opened a new window for exploring the universe which may allow us to probe the first instants of the universe through observations of gravitational waves from the epoch of inflation,' says Carlstrom.

The analysis of the CBI data is carried out in collaboration with groups at the National Radio Astronomy Observatory (NRAO) and at the Canadian Institute for Theoretical Astrophysics (CITA).

'This is truly an exciting time in cosmological research, with a remarkable convergence of theory and observation, a universe full of mysteries such as dark matter and dark energy, and a fantastic array of new technology--there is tremendous potential for fundamental discoveries here' says Steve Myers of the NRAO, a coauthor and key member of the CBI team from its inception.

According to Richard Bond, director of CITA and a coauthor of the paper, 'As a theorist in the early eighties, when we were first showing that the magnitude of the cosmic microwave background polarization would likely be a factor of a hundred down in power from the minute temperature variations that were themselves a heroic effort to discover, it seemed wishful thinking that even in some far distant future such minute signals would be revealed. With these polarization detections, the wished-for has become reality, thanks to remarkable technological advances in experiments such as CBI. It has been our privilege at CITA to be fully engaged as members of the CBI team in unveiling these signals and interpreting their cosmological significance for what has emerged as the standard model of cosmic structure formation and evolution.'

The next step for Readhead and his CBI team will be to refine these polarization observations significantly by taking more data, and to test whether or not the polarized emission is exactly out of step with the total intensity with the goal of finding some clues to the nature of the dark matter and dark energy.

The CBI is a microwave telescope array comprising 13 separate antennas, each about three feet in diameter and operating in 10 frequency channels, set up in concert so that the entire instruments acts as a set of 780 interferometers. The CBI is located at Llano de Chajnantor, a high plateau in Chile at 16,800 feet, making it by far the most sophisticated scientific instrument ever used at such high altitudes. The telescope is so high, in fact, that members of the scientific team must each carry bottled oxygen to do the work.

The upgrade of the CBI to polarization capability was supported by a generous grant from the Kavli Operating Institute, and the project is also the grateful recipient of continuing support from Barbara and Stanley Rawn Jr. The CBI is also supported by the National Science Foundation, the California Institute of Technology, and the Canadian Institute for Advanced Research, and has also received generous support from Maxine and Ronald Linde, Cecil and Sally Drinkward, and the Kavli Institute for Cosmological Physics at the University of Chicago.