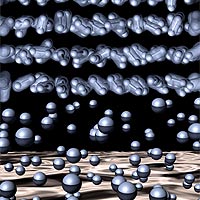 This figure illustrates the transition from a molecular solid (top) to a quantum liquid (bottom) that is expected to occur in hydrogen under high pressure.

Scientists at the Lawrence Livermore National Laboratory have discovered a new melt curve of hydrogen, resulting in the possible existence of a novel superfluid - a brand new state of matter

As reported in the Oct. 7 edition of the journal Nature, the researchers present the results of ab initio calculations of the hydrogen melt curve at pressures up to 2 million atmospheres.

The measurement of the high-pressure phases of hydrogen has been the focus of numerous experiments for nearly a century. However, the phase boundary that separates the solid and the liquid has remained relatively unknown.

Until now, when scientists Stanimir Bonev, Eric Schwegler, Tadashi Ogitsu and Giulia Galli reported the melt line with first principles simulations, and proposed new experimental measurements to verify the existence of a maximum melting temperature and the transformation of solid molecular hydrogen to a metallic liquid at pressures close to 4 million atmospheres.

“Our results show that a quantum fluid at around 4 million atmospheres of pressure is possible, at very low temperature” Bonev said. “Contrary to intuitive expectations, we discovered that the melting temperature versus pressure curve has a maximum, which is not directly related to molecular disassociation, but rather to changes in the intermolecular interactions in the fluid phase, occurring at high pressure”

The Livermore team's calculations not only predict a maximum in the melt line, but also provide a microscopic model showing its physical origin in changes in the intermolecular interaction - significantly different from earlier models. Based on their new understanding for the physics behind the melting of hydrogen, the researchers are able to propose new experiments to measure the solid-liquid phase boundary.

The calculated melt curve of hydrogen is between 500,000 atmospheres and 2 million atmospheres of pressure. Above about 800,000 atmospheres of pressure, the melt line goes from a positive to a negative slope - a phenomenon that is related to a softening of the intermolecular interactions and to the fluid and solid becoming very similar in structure and energy at high pressure. This change from a positive to a negative slope is gradual and is not directly related to molecular disassociation, as previously speculated.

“Our results provide strong evidence toward the existence of a low-temperature quantum fluid in hydrogen,” Bonev said. “The existence of a maximum melting temperature is a unique physical phenomenon in a molecular solid with a close packed structure.”

The simulations carried out by the Livermore team are very complex and sophisticated, and required the use of large-scale parallel quantum simulation codes, such as the LLNL GP ab-initio molecular dynamics code, written by F.Gygi in the Computation Directorate.