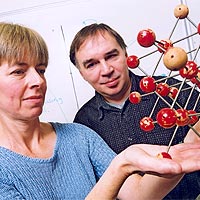 Researchers at the University of Warwick have found that phosphorus, an element commonly found in teeth, can act as a “superconductor” – but you would have to have the strength of Superman to clench your teeth hard enough for it to work - as it happens at a pressure of around 2.5 megabars – some 30,000 times harder than an ordinary human can clench their teeth.

Physicists were aware that lower pressures of around 0.1 megabars could convert the electrically insulating phosphorus to a form which can conduct and which allows limited superconductivity at 10 degrees Kelvin and under. Recently experimentalists have found that another form of phosphorus occurs when 2.5 megabars of pressure is applied which causes it to form a “body centred cubic” or bcc crystal structure, comprised of stacks of interpenetrating cubes of phosphorus atoms. Common metals such as iron and chromium have this structure at normal pressures. However it was not known until now if this form of phosphorus would superconduct.

Now University of Warwick physicists Sergey Ostanin and Professor Julie Staunton have used a number of theoretical physics techniques to describe the movement of the electrons and ionic vibrations, which proves that this version of phosphorus is an even better superconductor than the phosphorus held under 0.1 megabars of pressure. The University of Warwick researchers predict that the bcc structure of phosphorus will in fact superconduct at temperatures of around 14-22 Kelvin.

In their research paper in Physical Review Letters the University of Warwick researchers further suggest a clever means of preserving and using the bcc structure without having to resort to the high pressures. They suggest that the structure lends itself to being grown by depositing the atoms on a substrate of iron which itself organizes into a bcc structure. Anchoring the bcc phosphorus in this way would create and maintain its useful superconducting structure. Furthermore if the phosphorus bcc layer were positioned between a pair ferromagnets one could create a “superconducting switch” in which the phosphorus could be switched from superconductor to regular conductor and back again.