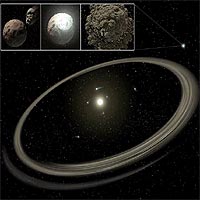 This artist's concept illustrates how planetary systems arise out of massive collisions between rocky bodies. New findings from NASA's Spitzer Space Telescope show that these catastrophes continue to occur around stars even after they have developed full-sized planets, when they are as old as one hundred million years. For reference, our own Sun, at 4.5 billion years old, is far past this late stage of planet formation.

In this image, a young star is shown circled by full-sized planets, and rings of dust beyond. These rings, also called 'debris discs' arise when embryonic planets smash into each other. One of these collisions is illustrated in the inset above.

Spitzer was able to see the dust generated by these collisions with its powerful infrared vision.

Planets are built over a long period of massive collisions between rocky bodies as big as mountain ranges, astronomers announced today.

New observations from NASA's Spitzer Space Telescope reveal surprisingly large dust clouds around several stars. These clouds most likely flared up when rocky, embryonic planets smashed together. The Earth's own Moon may have formed from such a catastrophe. Prior to these new results, astronomers thought planets were formed under less chaotic circumstances.

'It's a mess out there,' said Dr. George Rieke of the University of Arizona, Tucson, first author of the findings and a Spitzer scientist. 'We are seeing that planets have a long, rocky road to go down before they become full grown.'

Spitzer was able to see the dusty aftermaths of these collisions with its powerful infrared vision. When embryonic planets, the rocky cores of planets like Earth and Mars, crash together, they are believed to either merge into a bigger planet or splinter into pieces. The dust generated by these events is warmed by the host star and glows in the infrared, where Spitzer can see it.

The findings will be published in an upcoming issue of the Astrophysical Journal. They mirror what we know about the formation of our own planetary system. Recent observations from studies of our Moon's impact craters also reveal a turbulent early solar system. 'Our Moon took a lot of violent hits when planets had already begun to take shape,' Rieke said.

According to the most popular theory, rocky planets form somewhat like snowmen. They start out around young stars as tiny balls in a disc-shaped field of thick dust. Then, through sticky interactions with other dust grains, they gradually accumulate more mass. Eventually, mountain-sized bodies take shape, which further collide to make planets.

Previously, astronomers envisioned this process proceeding smoothly toward a mature planetary system over a few million to a few tens of millions of years. Dusty planet-forming discs, they predicted, should steadily fade away with age, with occasional flare-ups from collisions between leftover rocky bodies.

Rieke and his colleagues have observed a more varied planet-forming environment. They used new Spitzer data, together with previous data from the European Space Agency's Infrared Space Observatory and the joint NASA, United Kingdom and the Netherlands' Infrared Astronomical Satellite. They looked for dusty discs around 266 nearby stars of similar size, about two to three times the mass of the Sun, and various ages. Seventy-one of those stars were found to harbor discs, presumably containing planets at different stages of development. But, instead of seeing the discs disappear in older stars, the astronomers observed the opposite in some cases.

This variability implies planet-forming discs can become choked with dust throughout the discs' lifetime, up to hundreds of millions of years after the host star was formed. 'The only way to produce as much dust as we are seeing in these older stars is through huge collisions,' Rieke said.

Before Spitzer, only a few dozen planet-forming discs had been observed around stars older than a few million years. Spitzer's uniquely sensitive infrared vision allows it to sense the dim heat from thousands of discs of various ages. 'Spitzer has opened a new door to the study of discs and planetary evolution,' said Dr. Michael Werner, project scientist for Spitzer at NASA's Jet Propulsion Laboratory, Pasadena, Calif.

'These exciting new findings give us new insights into the process of planetary formation, a process that led to the birth of planet Earth and to life,' said Dr. Anne Kinney, director of the universe division in the Science Mission Directorate at NASA Headquarters, Washington. 'Spitzer truly embodies NASA's mission to explore the universe and search for life,' she said.