The 2003 Nobel Prize in Physics 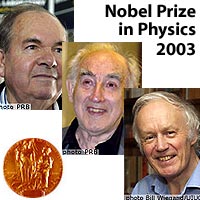 Winners of the 2003 Nobel Prize in Physics: (from top left to bottom right:

This year's Nobel Prize in Physics is awarded to three physicists who have made decisive contributions concerning two phenomena in quantum physics: superconductivity and superfluidity. Superconducting material is used, for example, in magnetic resonance imaging for medical examinations and particle accelerators in physics. Knowledge about superfluid liquids can give us deeper insight into the ways in which matter behaves in its lowest and most ordered state.

At low temperatures (a few degrees above absolute zero) certain metals allow an electric current to pass without resistance. Such superconducting materials also have the property of being able to displace magnetic flows completely or partly. Those that displace magnetic flows completely are called type-I superconductors and a theory explaining them was awarded the Nobel Prize in Physics in 1972. This theory, which is based on the fact that pairs of electrons are formed proved, however, to be inadequate for explaining superconductivity in the technically most important materials. These type-II superconductors allow superconductivity and magnetism to exist at the same time and remain superconductive in high magnetic fields. Alexei Abrikosov succeeded in explaining this phenomenon theoretically. His starting point was a theory that had been formulated for type-I superconductors by Vitaly Ginzburg and others, but which proved to be so comprehensive that it was also valid for the new type. Although these theories were formulated in the 1950s, they have gained renewed importance in the rapid development of materials with completely new properties. Materials can now be made superconductive at increasingly high temperatures and strong magnetic fields.

Liquid helium can become superfluid, that is, its viscosity vanishes at low temperatures. Atoms of the rare isotope 3He have to form pairs analogous with pairs of electrons in metallic superconductors. The decisive theory explaining how the atoms interact and are ordered in the superfluid state was formulated in the 1970s by Anthony Leggett. Recent studies show how this order passes into chaos or turbulence, which is one of the unsolved problems of classical physics.

Prize amount: SEK 10 million, will be shared equally among the Laureates.