Nuna II breaks all records in the World Solar Challenge! 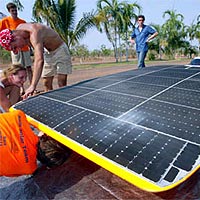 Having set off from Darwin on Sunday 19 October, Nuna II crossed the finish line in Adelaide on Wednesday 22 October in a new record-breaking time of 30 hours 54 minutes, beating the previous record of 32 hours 39 minutes set by its Dutch precursor Nuna in 2001.

The average speed of Nuna II, nicknamed the ‘Flying Dutchman’ by the Australian press, was 97 kilometres per hour, also an improvement on the previous record of 91.8 kilometres per hour by Nuna. Despite two quickly changed flat tires Nuna II travelled 830 km on the third racing day - never before has such a distance been accomplished within one day. On the fourth and final day Nuna again pushed the limits by driving at a top speed of 110 km per hour, finally setting a new world record.

Nuna II, the space age solar racing car from the Netherlands, held the lead right from the start. Before the start of the competition it was already tipped as a hot favourite because the streamlined racing car – like its precursor Nuna in 2001 – uses advanced space technology, provided to the team via ESA’s Technology Transfer Programme, enabling the car to reach a theoretical top speed of 170 km per hour.

The aerodynamically optimized outer shell consists of space-age plastics to keep it light and strong. The main body is made from carbon fibre, reinforced on the upper side and on the wheel’s mudguards with aramide, better known under the trade name of Twaron. Twaron is a material used in satellites as protection for micrometeorite impacts, and nowadays also in high performance equipment like bulletproof vests.

The car’s shell is covered with the best triple junction gallium-arsenide solar cells, developed for satellites. These cells harvest up to 20% more energy than those used on Nuna for the 2001 race. Only weeks before the race ESA used these solar cells for the first time when the technology-demonstrating SMART-1 mission was launched to the Moon.

Nuna II also carries Maximum Power Point Trackers, small devices that guarantee an optimal balance between power from the battery and the solar cells, even in less favourable situations like shade and cloud. Many satellites carry these devices, for instance ESA's Rosetta mission to comet Churyumov-Gerasimenko, due for launch in February 2004.

Nuna II has been built by a team of 12 students from the universities of Delft and Rotterdam. To fulfil their mission, the student team has collected an impressive line-up of supporters. ESA not only provided them with engineering support via its Technology Transfer Programme but also with general support via the Education Office, previously headed by former ESA astronaut Wubbo Ockels, who is also adviser to the team. Ockels guided the first space-based solar car Nuna to its victory in 2001.