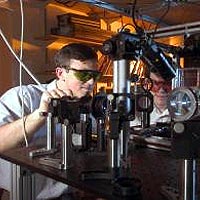 A team of physicists at the Georgia Institute of Technology has taken a significant step toward the development of quantum communications systems by successfully transferring quantum information from two different groups of atoms onto a single photon.

The work, to be published in the October 22 issue of the journal Science, represents a 'building block' that could lead to development of large-scale quantum networks. Sponsored by the Research Corporation and NASA, the work is believed to be the first to demonstrate transfer of quantum information from matter to light.

The researchers, Assistant Professor Alex Kuzmich and graduate student Dzmitry Matsukevich – both from Georgia Tech's School of Physics – report transferring atomic state information from two different clouds of rubidium atoms to a single photon. In the photon, information about the spatial states of the atom clouds was represented as vertical or horizontal optical polarization.

Qubits, or quantum bits, are very different from the bits in conventional computing. Unlike conventional bits that exist in either a 0 or 1 state, qubits can simultaneously exist in both states. Qubits can also interact with other qubits, their properties 'entangled' in ways unique to quantum systems. These odd properties mean quantum computers could provide dramatic advantages over conventional systems in certain types of computation that are difficult for conventional computers.

The approach taken by Kuzmich and Matsukevich begins with two clouds of rubidium atoms, each cloud with a different state, forming a matter qubit. By passing a split beam of light separately through each cloud (also known as an ensemble) and then recombining it, they were able to create a qubit that was entangled with a single photon.

Other research teams have been working to map states from a single atom onto a photon. Kuzmich says using the atomic cloud of very cold atoms as a matter qubit offers a simplicity advantage in creating the entanglement.

'The state of the qubit is the collective state of the atomic ensemble,' he explained. 'Conversion from matter to light becomes efficient in one direction because emission from all the atoms add together to create a preferred forward direction, similar to how radio frequency antennas are able to emit directionally.'

Using optically thick atomic ensembles for the interface between matter and light in long-distance quantum communication was proposed in 2001 by a team of researchers (Duan, Lukin, Cirac and Zoller) from the University of Innsbruck in Austria. The Georgia Tech researchers built on that work, which has become known as the DLCZ protocol.

* An entangled state between a single photon (signal) and a single collective excitation distributed over many atoms in two distinct optically thick atomic samples is generated;

* Measurement of the signal photon maps the atomic ensembles into a desired state, conditioned on the choice of the basis and the outcome of the measurement. This atomic state is nearly a maximally entangled state between two distinct atomic ensembles;

* This atomic state is then converted into a single photon (idler) emitted into a well-defined mode.

Conversion of quantum states from atomic-based systems to photonic systems is necessary for long-distance communication. While the matter-based systems can provide long-term storage of information, efficient transfer of information requires that it be converted into a photonic state for transmission across optical fiber networks.

Once converted into a photonic qubit, the information can be processed and may not need to be converted back to a matter-based qubit.

'If you want to realize a quantum repeater, you must have two such quantum nodes,' Kuzmich explained. 'But in this quantum communications approach, you don't ever need to convert the photon back to atomic format.'

For their research, the Georgia Tech physicists used light at a wavelength of 780 nanometers. For transmission in conventional optical fiber networks, however, they will have to switch to the 1550 nanometer wavelength that has become standard in the telecommunications industry.

The Science paper reported on atom clouds containing approximately a billion rubidium atoms. Kuzmich says having 10 billion atoms compressed into the same space would boost efficiency. 'We should be able to increase our efficiency by a factor of ten at least,' he said.

Practical applications are still at least 7-10 years away, Kuzmich estimates.

Detailed Explanation of Experiment Diagram: A magneto-optical trap is used to provide an optically thick atomic cloud of a billion rubidium atoms for the experiment. The classical coherent laser pulses used in the generation and verification procedures define the two distinct pencil-shape components of the atomic ensemble that form the memory qubit, L and R.

An infrared write pulse (780 nm wavelength) is split into two beams by a polarizing beam splitter (PBS1) focused into two regions of the atomic cloud about 1 mm apart and passed through it. The light induces spontaneous Raman scattering of a signal photon with slightly shorter wavelength. The classical light is dumped away by the PBS2, while the quantum signal photon is transmitted by the dichroic mirror DM, passed through an arbitrary polarization state transformer R and a polarizer PBS5, and is directed onto a single-photon detector D1. Detection of the signal photon by D1 prepares the atomic ensemble in any desired state and thereby concludes the preparation of the quantum memory qubit.

Following memory state preparation, the read-out stage is performed. After a user-programmable delay a classical coherent read pulse of 795 nm wavelength illuminates the two atomic ensembles. This results in a single (i.e., quantum) idler photon being emitted in the forward direction. This accomplishes a transfer of the memory state onto the idler. The idler is reflected off the dichroic mirror DM. After passing through the state transformer R and PBS6, the two polarization components are directed onto single-photon detectors (D2, D3) thus accomplishing measurement of the idler photon, and hence the memory qubit, in a controllable arbitrary basis.