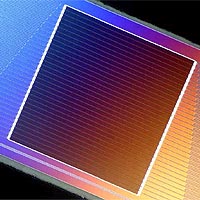 Prototype of a detector array for 2D imaging of visible photons.

A new and improved way to measure light has been unveiled by physicists at NASA’s Jet Propulsion Laboratory and the California Institute of Technology, both in Pasadena, Calif. The technology exploits the strange but predictable characteristics of superconductivity, and has a number of properties that should lead to uses in a variety of fields, from medicine to astrophysics.

Reporting in the October 23 issue of Nature, JPL researchers Drs. Peter Day and Henry LeDuc, along with Dr. Jonas Zmuidzinas, a Caltech physics professor, outline the specifications of their superconducting detector. The device is cleverly designed to sidestep certain limitations imposed by nature to allow for very subtle and precise measurements of electromagnetic radiation, which includes visible light, radio signals, X-rays and gamma rays, as well as infrared and ultraviolet frequencies.

At the heart of the detector is a strip of material that is cooled to such a low temperature that electrical current flows unimpeded -- in other words, a superconductor. Scientists have known for some time that superconductors function as they do because of electrons in the material being linked together as "Cooper pairs" with a binding energy just right to allow current to flow with no resistance. If the material is heated above a certain temperature, the Cooper pairs are torn apart by thermal fluctuations, and the result is electrical resistance.

The researchers designed their device to register the slight changes that occur when an incoming photon -- the basic unit of electromagnetic radiation -- interacts with the material and affects the Cooper pairs. The device can be made sensitive enough to detect individual photons, as well as their wavelengths or color.

However, a steady current run through the superconducting material is not useful for measuring light, so the researchers have also figured out a way to measure the slight changes in the superconductor's properties caused by the breaking of Cooper pairs. By applying a high-frequency microwave field of about 10 gigahertz, a slight lag in the response due to the Cooper pairs can be measured.

In fact, the individual frequencies of the photons can be measured very accurately with this method, which should provide a significant benefit to astrophysicists, as well as researchers in a number of other fields, Zmuidzinas said.

"In astrophysics, this will give you lots more information from every photon you detect," he explained. "There are single-pixel detectors in existence that have similar sensitivity, but our new detector allows for much bigger arrays, potentially with thousands of pixels."

Such detectors could provide a very accurate means of measuring the fine details of the cosmic microwave background radiation, which is the relic of the intense light that filled the early universe. It’s detectable today as an almost uniform glow of microwave radiation coming from all directions.

Measurements of the radiation are of tremendous interest in cosmology today because of extremely faint variations in the intensity of the radiation that form an intricate pattern over the entire sky. These patterns provide a unique image of the universe as it existed just 300 thousand years after the Big Bang, long before the first galaxies or stars formed. The intensity variations are so faint, however, that it has required decades of effort to develop detectors capable of mapping them.

It was not until 1992 that the first hints of the patterns imprinted in the radiation by structure in the early universe were detected by the Cosmic Background Explorer satellite. In 2000, using new detectors developed at JPL and Caltech, the Boomerang experiment, led by Caltech physicist Dr. Andrew Lange, produced the first resolved images of these patterns. Other experiments, most notably the Cosmic Background Imager of Caltech astronomer Dr. Tony Readhead, and the Wilkinson Microwave Anisotropy Probe, led by Dr. Charles L. Bennett of NASA’s Goddard Space Flight Center, Greenbelt Md, have confirmed and extended the results to even higher resolution. The images obtained by these experiments have largely convinced the cosmology research community that the universe is geometrically flat and that the theory of rapid inflation proposed by Dr. Alan Guth, a physicist at the Massachusetts Institute of Technology, Cambridge, Mass., is a reality.