Hubble Prospects For Resources on The Moon 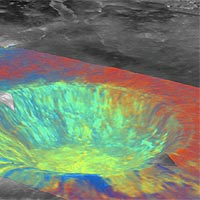 The color composite focuses on the 26 mile (42 km) diameter Aristarchus impact crater, and uses ultraviolet- to visible-color-ratio information to accentuate differences that are potentially diagnostic of ilmenite-bearing materials as well as volcanic glasses and other materials.

America has always been a land of pioneers, from the first settlers to those who moved west in the 1800s. As they started their new lives in new places, these men and women had to learn to live off of the land.

Now, the U.S. is planning another pioneering journey, this time to the moon and beyond. To prepare, NASA scientists are using the Hubble Space Telescope to hunt for resources, such as oxygen, that are essential for people to survive and to sustain their existence on the lunar surface. Hubble's preliminary observations and results are promising.

Although U.S. astronauts have visited the moon before, they only spent a few days there, making short forays into the barren landscape. A new Vison for Space Exploration, announced by President George W. Bush in January 2004, calls for the establishment of human outposts on the moon and later, human exploration of Mars. This time, we're going back to stay.

The Hubble telescope is known for its views of faraway galaxies, distant planets, dying stars, and black holes. Hubble's snapshots of the moon, however, represent the first time that scientists have used the telescope to support human space exploration. Scientists enlisted Hubble's help because they needed to use ultraviolet light to help find signatures of lunar materials enriched in oxygen. Since ultraviolet light is blocked by gases in the Earth's atmosphere, ground-based telescopes can't use it to observe the lunar surface. But Hubble, orbiting above Earth's atmosphere, can see in ultraviolet light> The telescope mapped variations in reflections of ultraviolet light off the lunar surface to search for specific mineral fingerprints.

A preliminary assessment of the Hubble observations pinpoints possible locations of ilmenite, a titanium oxide rich in oxygen, at the Apollo 17 landing region. Ilmenite is a potentially key resource because it contains easily extracted oxygen, which can be used for breathing and for rocket fuel. Since the moon doesn't have an atmosphere, scientists must hunt for oxygen in lunar soils if we are to learn to live off the “land”.

The Apollo astronauts who visited the moon more than 30 years ago brought back glassy material containing ilmenite. So, scientists used Hubble to search for nearby sites that might also contain detectable ilmenite using ultraviolet “fingerprints” similar to those measured in labs hear on Earth.

The telescope first observed two Apollo landing sites, where astronauts had found the glassy, oxygen-bearing minerals. Hubble then viewed an area that astronauts have never visited: the young Aristarchus impact crater and the adjacent Schroter's Valley, or rille, where lava once flowed and which possibly contains additional oxygen-bearing material. A few billion years ago, lava flows and volcanic ash deposits covered the entire region with glassy material. The material is potentially similar to that found at some of the Apollo sites. Aristarchus crater, twice as deep as the Grand Canyon and 26 miles wide (42 km), was created when a asteroid collided with the moon a few hundred million years ago.

Scientists compared the ultraviolet and visible views of the two Apollo sites with the Aristarchus and Schroter's Valley regions. The reflected ultraviolet light from Aristarchus and Schroter's Valley was similar in some ways to that of the Apollo 17 site, indicating the possible presence of titanium oxides as well as other materials. Unravelling the complete story at Aristarchus will take more detailed analysis by the Hubble moon team over the next several months.

The Apollo descent stages left on the lunar surface are too small to be seen by Hubble, which can see objects as small as 60-75 yards, about three-quarters the length of a soccer field. The left-behind descent stages are only about the size of a small truck.

These observations weren't easy. The moon is a difficult target for Hubble because it moves across the sky faster than Hubble can track it and is very dim in ultraviolet light. The observations required steady, precise, as well as long exposures to search for the resources. In spite of these challenges, Hubble was able to image all of its targets, and early results show that Hubble can detect ilmenite at the Apollo 17 site from 248,000 miles (400,000 km) away.

Thanks to the eyes of Hubble, the vision of 21st Century pioneers on the moon is getting a little clearer.