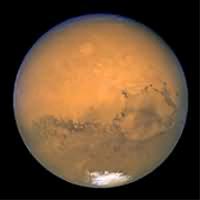 Mars in 2003, from the Hubble Space Telescope

When people gaze at the sky in late October to catch a better glimpse of Mars, it will continue a long-time fascination with the planet dating back to ancient times, a University of Michigan professor and author said.

Mars has been one focal point in astrology, astronomy, religion and popular culture for thousands of years, said Eric Rabkin, an English professor who wrote 'Mars: A Tour of the Human Imagination.'

People are fascinated with Mars’ unique color and movement,' he said. 'The color has been associated with bloody war—when ancient Mesopotamians, Greeks and Romans considered Mars as their god of war—and as the blood of life.

'All the planets, watched over time, move against the background of the fixed stars, but the two-Earth-year path of Mars marches backwards for about 70 days each cycle, fascinating observers from the beginning of history.'

Known as the Red Planet, Mars has long been seen as a likely home to life like ours, usually hostile, Rabkin said. Mars is also a common setting for dreams and fiction, and the subject of numerous books, films and radio/television programs, he said.

Rabkin writes about how the scientific and cultural imagination of Mars has changed over many years, beginning with the astronomical connection of Ares, the Greek god of war. In recent years, public comments about the planet—which Rabkin described as 'NASA-fication'—has resulted in some people considering the planet as an eighth continent of Earth, he said.

Sky watchers can view a brighter Mars, as it converges closer to Earth at 43.1 million miles (69 million kilometers) around 10:19 p.m. EST on Oct. 29. To the unaided eye, Mars will look like a bright red star, a pinprick of light. The last encounter with Mars occurred two years ago, on Aug. 27, 2003—the closest in recorded history as the distance between Mars and Earth shrunk to 34.7 million miles (56 million kilometers), NASA reported.

'With Mars vivid in our skies, expect some to use this moment to excite public support for space exploration,' he said.