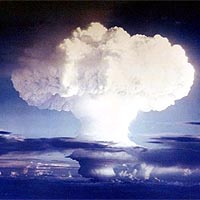 More than 470 physicists, including seven Nobel laureates, have signed a petition to oppose a new U.S. Defense Department proposal that allows the United States to use nuclear weapons against non-nuclear states.

The petition was started by two physics professors at the University of California, San Diego, Kim Griest and Jorge Hirsch, who said they felt an obligation to speak out about the nuclear policy change because their profession brought nuclear weapons into the world 60 years ago.

They and other prominent physicists who signed the petition—which will be delivered to members of Congress, scientific professional societies and the news media—object to the new policy because it blurs the sharp line between nuclear weapons and conventional, chemical and biological weapons.

“Humanity has gone more than half a century without using nuclear weapons, in large part because of the success of the Nuclear Non-Proliferation Treaty,” said Griest. “The U.S. use of nuclear weapons against non-nuclear states will destroy the Nuclear Non-Proliferation Treaty and give strong incentive for other countries to develop and use nuclear weapons, thus making nuclear war more likely. As physicists we feel we need to bring this to the attention of policy makers and the public, in order to engender discussion, debate, and hopefully repudiation of the new policy.”

The two physicists began their grass roots petition last month following reports in The New York Times and Washington Post that the federal government was in the final process of adopting a new U.S. policy that would permit the use of nuclear weapons against an adversary for the following reasons:

* For rapid and favorable war termination on U.S. terms.
* To ensure success of U.S. and multinational operations.
* To demonstrate U.S. intent and capability to use nuclear weapons to deter adversary use of weapons of mass destruction.
* Against an adversary intending to use weapons of mass destruction against US, multinational, or alliance forces.

Griest and Hirsch put their petition on the internet at http://physics.ucsd.edu/petition/ , invited their colleagues to sign and quickly received an avalanche of responses.

The petition is signed by two past presidents of the American Physical Society, the premier professional organization for U.S. physicists—George Trilling of UC Berkeley and Jerome Friedman of MIT. Friedman, who is also a Nobel laureate, was joined on the petition by six other Nobel Prizewinners in physics—Philip Anderson of Princeton University, Anthony Leggett of the University of Illinois, Douglas Osheroff of Stanford University, Daniel Tsui of Princeton University, Steven Weinberg of the University of Texas and Frank Wilczek of MIT.

Other prominent physicists on the petition include Fields Medal winner Edward Witten of the Institute for Advanced Study, Wolf Prize laureates Michael Fisher of the University of Maryland and Daniel Kleppner of MIT, and Leo Kadanoff of the University of Chicago, a recipient of the National Medal of Science and president-elect of the American Physical Society.

“We point out in the petition that nuclear weapons are on a completely different scale than other weapons of mass destruction and conventional weapons and that the underlying principle of the Nuclear Non-Proliferation Treaty is that in exchange for other countries forgoing the development of nuclear weapons, the nuclear weapon states will pursue nuclear disarmament,” said Hirsch. 'Instead, this new U.S. policy dramatically increases the risk of nuclear proliferation and, ultimately, the risk that regional conflicts will explode into all-out nuclear war, with the potential to destroy our civilization.”