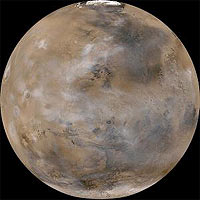 A University of Michigan scientist is part of a European Space Agency team that has detected methane gas on Mars, and the findings will be published in the online Web journal Science Express October 28th, 2004 issue.

Sushil Atreya, professor and director of the Planetary Science Laboratory in the College of Engineering says the detection of methane is the clearest indicator of the possibility of life on the Red Planet yet.

'Biologically produced methane is one of many possibilities,' Atreya said. 'Methane is a potential biomarker, if a planet has methane we begin to think of the possibility of life on the planet. On Earth, methane is almost entirely derived from biological sources.'

Mars resembles Earth more than any other planet in our solar system, and studying its atmosphere gives us a greater understanding of our own.

How the methane got to Mars is the big question, and there are several possible sources, Atreya said. The most exciting scenario is that methanogens—microbes that consume the Martian hydrogen or carbon monoxide for energy and exhale methane—dwell in colonies out of sight beneath the surface of the red planet.

Speculation is tempting, but many more experiments are necessary before drawing any conclusions.

'While it's tantalizing to think there are living things on Mars, we aren't in a position to say that is what is causing the methane,' Atreya said.

A comet could have struck the planet, which would leave methane behind, but that only happens once every 60 million years or so, Atreya said. A more likely scenario is hydrothermal process involving chemical interaction between rock and water in aquifers below the Martian permafrost.

The instrument that sniffed out the methane is called a planetary Fourier spectrometer, and it is one of seven instruments on board the Mars Express spacecraft. The spectrometer measures the Sun's infrared light that has been absorbed, emitted and scattered by the molecules in the Martian atmosphere. Every molecule has a unique spectral property—think of it as an infrared fingerprint—including methane.

The spectrometer detected an average 10 parts per billion by volume (ppbv) of methane on Mars, a small amount compared to the approximately 1700 ppbv on Earth. The methane gas was distributed unevenly over Mars' surface, which tends to support the theory that an internal, on-site source, rather than a comet, is the source generating the methane, said Atreya.

Mars Express launched in June 2003, and it is the first Western European trip to another planet.

News Story Origin and Copyright: UMich
Click here for the original news release.
'We are all in the gutter, but some of us are looking at the stars.'