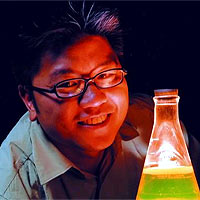 In Professor Warren Chan's laboratory, nanosized quantum dots light up like multicoloured fireflies when exposed to ultraviolet light. But it’s nothing compared with how Chan’s face lights up when he talks about his goals for these microscopic particles — making it possible to detect, target and kill cancer cells.

The 30-year-old assistant professor came to the Institute of Biomaterials and Biomedical Engineering three years ago. While completing his post-doctoral work in biomedical engineering at the University of California at San Diego, Chan was working on a project that involved finding the best way to observe how a virus infects a cell. The theory behind it is similar to how biologists track whales — they tag them with some sort of transceiver and monitor the signal.

But in the lab, trying to track viruses proved tricky. Whenever Chan put a tag — such as standard organic dyes — on the surface of a virus, he would lose the signal after three to five seconds. Along with his adviser, he started to examine quantum dots — nanoscale particles of semiconductors — as possible alternatives to the dyes. “Quantum dots were initially thought to be used for electronic circuitry,” he says. “But what we saw in the literature was that these beautiful structures had never been applied to biology.”

Under a light source, the quantum dots glow like neon signs. “Under low-power or medium-power excitation, they can last for over 48 hours without much loss of light,” Chan says. This meant that he could actually track a virus over the course of a biological process. The colour of light they emit can be changed by altering their size, with smaller dots emitting blue, green or yellow light and larger dots appearing orange, red or brown. “We can basically custom design the properties of the materials for whatever applications we need.”

Still, a major challenge remains. Quantum dots normally have a very oily surface and, like the old saying goes, oil and water don’t mix: the dots wouldn’t do well inside the water-based cellular environment. Chan is now looking for ways to modify the surface chemistry so that they interact with water-friendly molecules like proteins and DNA.

Chan is now exploring whether these structures can be used to “light up” disease in animals, with future implications in humans. “When cells are diseased, they produce a unique set of proteins on their surface. If you find a matching molecule [to those proteins], you can take whatever you want to that site,” he says. By attaching a quantum dot to a molecule that will target a specific type of cancer, for example, over time the dots will accumulate in the tumour. “As it accumulates, you see the animal light up in that particular region.”

Still, Chan cautions that there are limitations to light-based technology. “Light can only penetrate so far into the body. You can screen for surface cancers but the deeper the cancer, the harder it is to screen using quantum dots as a technique.” For example, screening for skin, breast or prostate cancer might be possible but the technology might not work for lung or colon cancer.

Chan also wants to determine where these nanostructures end up in the body and whether they are toxic. The quantum dots are made of potentially toxic heavy metals which, because of their size, can find their way into body structures that other materials can’t. “Nanotechnology has the potential to have many applications like contrast agents, biosensors and new diagnostic schemes,” says Chan. “But you have to think about the other side of it — how does your body deal with these materials because we’re going to be exposed to them on a more common basis. Right now, there is a need to handle these things carefully because we don’t understand the after-effects.”

Chan hopes that his current goal — to develop quantum dots that can target a disease site and light it up — can someday lead to an integrated system that will also use the quantum dots to bring drug therapies to the disease site. Beyond cancer, he is also exploring whether the dots could be used to detect pathogens such as malaria and HIV and he estimates that his quantum dots could be lighting up human disease within five to 10 years.

News Story Origin and Copyright: UToronto
Click here for the original news release.
'On the mountains of truth you can never climb in vain: either you will reach a point higher up today, or you will be training your powers so that you will be able to climb higher tomorrow.'